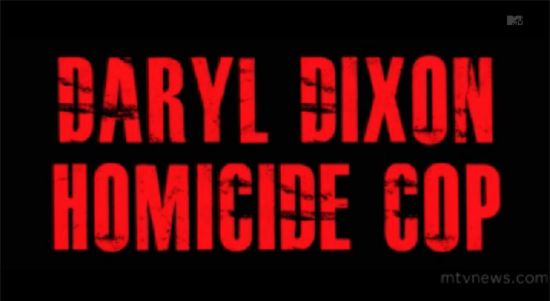 After last night's episode of The Walking Dead, we suspected that someone would do this. During The Walking Dead Season 4 Premiere, there was a big joke made about what Daryl Dixon's job was before the zombie apocalypse. At the prison, Daryl has risen to rock star status, because he hunts and brings back food for the group, so people are really interested in his past.

Beth's boyfriend Zach even had a game going of trying to guess Daryl's former job. When he guessed that Daryl was a "homicide cop," Daryl initially played along. When Michonne laughed at the guess, Daryl teased, "Actually, the man’s right. Undercover." Daryl added, "It was some real undercover s***, I don't like to talk about it."

While Daryl was just having a little fun with Zach, MTV has created an actual prequel trailer for "Daryl Dixon: Homicide Cop." They used footage from two Boondock Saints movies, The Walking Dead, and Brother's Keeper to create the trailer. Michael Rooker even shows up in the trailer as Chief Merle Dixon. Even though it's a parody trailer, we bet a lot of people would tune in if AMC actually did this show.