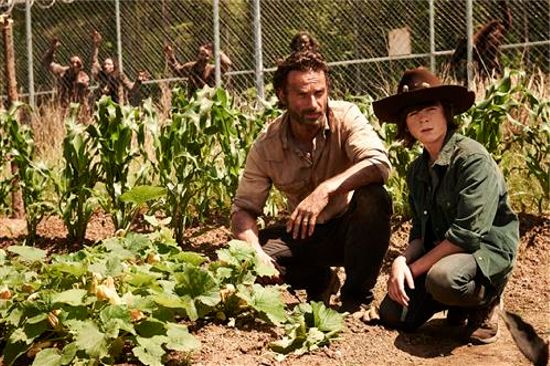 With Rick’s group split up at the end of The Walking Dead Mid-Season Finale, it raises a lot of interesting possibilities for the final eight episodes. We've compiled some spoilers for the remaining episodes of Season 4. We have not yet seen any future episodes, so these spoilers are based on what we've heard from sources with a dash of speculation mixed in to fill in the gaps.

5. Rick's Group Divided - Judging from what we’ve heard, don’t expect Rick’s group to all get back together right away. In fact, there will likely be a couple of standalone type episodes, similar to The Governor-centric episodes, which focus on just one cast member or a small group of cast members.

4. Carl Is The Center Of An Entire Episode - Speaking of episodes focusing on just one cast member, Chandler Riggs will basically carry one entire episode. In a preview clip aired during the Talking Dead, Carl was the only member of Rick’s group shown, as he coaxed two walkers away from a house, which is likely a scene from the Carl-centered episode. As Andrew Lincoln told Comicbook.com exclusively, “Just wait, all I will say is just wait for what this kid [Chandler Riggs] is going to do this season. He I think has done one of the best episodes certainly this season, and he kind of carries it. It’s beautiful what he’s done.” It looks like Carl’s 31-year-old female stunt double will be earning her money in that episode.

3. More Daryl Dixon - For the first part of Season 4, Daryl has gotten relatively little screen time as compared to Season 3. Norman Reedus fans should be pleased with the second half of Season 4, as there will be a lot more Daryl. Just like with Carl, expect at least one episode, maybe two to focus almost exclusively on Daryl.

2. Carol Returns - Walking Dead creator Robert Kirkman has confirmed that Carol will return before the end of Season 4. But here's something that hasn't been confirmed. The rumor is that when she returns that she will meet up with Tyreese, who still doesn't know that she killed Karen and David.

1. A Major Character Dies - Ok, predicting that someone else will die before Season 4 of The Walking Dead wraps up is pretty much like predicting the sun will rise in the morning. However, we've got a pretty good indication of which cast member will be dying, and let's just say it will be a real shocker. If what we believe is correct, then one of the main cast members who has not been killed in the comic book series will die during Season 4.

The Walking Dead: Five Spoilers For The Rest Of Season 4