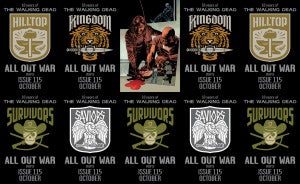 The big battle between Rick's group of survivors and the other factions in Robert Kirkman and Charlie Adlard's The Walking Dead kicks off on October 9, bus so far we're looking back into the past of the series with the release of one of the issue's ten interlocking tenth-anniversary covers.

The covers, when viewed together, form an image that highlights significant moments from the past 10 years of the series. Each of the 10 individual covers will also depict a special moment from a year of The Walking Dead’s illustrious history. These covers are drawn by series artist Charlie Adlard, with colors by Dave Stewart.

It's spoilery for fans of the TV series, since the story in question hasn't yet--and might not ever--happen on TV, but every time we mention it we get nasty comments. But it's a key moment from the series' third year, and if the variants follow suit we could see a very interesting reveal when that last cover is unveiled.