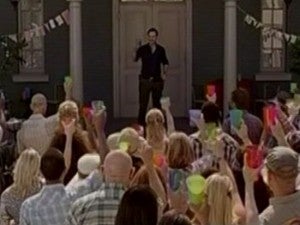 Warning: Spoilers below for last night's episode of AMC's The Walking Dead.

Following last night's blockbuster episode (maybe you've read something about it?) which saw a total of 27 deaths, not all of which were people whose bodies were already cold before the show began, how is The Walking Dead planning to top what some fans and critics are calling their best, most intense episode ever?

Well, as in the real world, the world of The Walking Dead often requires a funeral after a death, so it looks as though the episode will start out somewhat more down-to-earth and less frenzied than this week's...although that's probably what people would have thought when they saw last week's teaser, in which Glenn and Maggie were getting busy in the guard tower.

Axel and Oscar, welcomed into the group during last night's melee, join an angry, sullen and disaffected Glenn, who is digging a grave. After initially resisting their offer for help, he eventually tells them, "I need two more."

The real question, then, is who the third grave is for. Is it Andrew, who attacked the prison and set the stage for last night's massacre and the deaths of two of the survivors? Given the number of walker bodies they were planning on burning, it's hard to imagine that they would bother giving a "proper" burial to someone who has so damaged their group.

Maybe this clip happens later in next week's episode, when something tragic has already befallen another member of the group?

More likely than not, it's just a precautionary grave for Carol, who the survivors assumed dead when she disappeared this week. But is she really dead? Something tells us it's not likely.