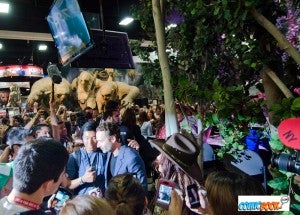 And here's the real skinny:

First of all, as already reported, the series will return to television on October 14, so fans who have their annual Walking Dead Halloween parties will be able to do so with three episodes backlogged on their DVRs.

Creator Robert Kirkman told fans that they'll get to see the prison almost immediately when the season premiere kicks off in October; executive producer Dave Alpert chimed in to say how exciting it was to see that beloved setting from the comics come to life onscreen.

"Everything that's come out has been better than the vision in my head," he said. "I feel like the pace picked up at the end of season two, and now we have our foot on the accelerator in a big way."

Moderator Chris Hardwick asked Greg Nicotero about the process of actually creating the zombies on the makeup and effects side of things, and Nicotero told him that there's a distinctly different look for the walkers in season three because, time having passed since the start of the plague, the zombies are starting to get fed less and less often. "We're constanltly evolving the look, we really want to show that they're decomposing and emaciated and hungry," he told the audience, adding that they're already almost halfway through the thirteen-episode third season and he thinks it's keeping up well.

Nicotero HAS to take the long view into the project since he's a director now, having just taken on his first episode.

"For me, you would assume that shooting the zombie stuff is second nature, and it is," said the special effects legend. "It's important for me that the character stuff stay grounded." He also said that his episode features "three iconic moments from the comic."

What those moments are, is anyone's guess...although certainly if this is halfway through the season and--as many guess--the season ends with the series' big showdown with The Governor, it could be that at least one of them is the loss of Rick's hand.

Executive producer Gale Anne Hurd says that in addition to the scripts, the cast has to keep their intensity all the time, and that she thinks they're managing it really well.

"The intensity level is incredible," she said. "We've got our cast innoculated now. They realize just what they're in for and the new people are just as passionate for The Walking Dead as the rest of us."

Producer Glen Mazzara told fans to expect more creative zombie stuff, not unlike the "well walker" from last season, as the new season kicks off. Deferring to the experience of Nicotero, who's been doing this a while, the producer says that zombie ideas are run by the special effects guys first.

"We'll call Greg and say,'Has this ever been done in a zombie movie before?' he'll say no, then we'll try it." He also said that while some horrible things happen to characters in the comics, and that's harder to do in live-action, the show intends to stay true to the spirit of the comic by making sure that fans can be invested in the characters--but that there are consequences.

The panel then went silent to make room for a first-look clip of the third season, which began with the already-online scene of Michonne cutting down walkers, then followed by a military vehicle crashing and a series of quick phrases.

"The prison is ours."

Michonne finds herself, along with Andrea, captured in Woodbury before we see Rick facing off against The Governor. The clip ends on a shot of Merle Dixon.

All of the actors expressed how good it is to be at Comic-Con and how awesome it is to interact directly with the fans, "even though I know some of you are mad at me," joked Sarah Wayne Callies, who plays the unpopular Lori Grimes on the show.

"He's a guy who's under the thumb of his big brother Merle," said Norman Reedus of his character, Daryl Dixon. "Away from him, he's starting to find himself bonded and initiated, he'd fight to the death for these people. He's finding his way and growing up. I love playing him. I keep finding new things about him out"

It should be interesting, then, to see what happens when Merle returns this season with a mean-on for the new family Daryl has forged.

Said Laurie Holden of the relationship her character Andrea has with newcomer Michonne (played by Danai Gurira), "At the end of Season 2 I was saved by this wonderful woman Michonne, played by Danai. She's met this alpha female and they become very good friends and watch each other's back." She says that the pair bonded quickly off-camera as well, and that she thinks Gurira was a great addition to the show's cast.

Stephen Yeun, meanwhile, who plays the fan-favorite character Glen, says that his character "has an identifiable arc" and is forced to grow up this season. A lot has happened with Glen in the recent past in the comics, and it would be interesting to see whether some of that will be reflected in the series.

"I think Maggie's pretty lucky right now, she still has more family with her left than anyone else does," said Lauren Cohan of her character. "We are now thrown into an absolutely insane world. The farm was a walk in the park compared to where we are now."

That's something that carries through to the real world, as the cast agreed that the air conditioning in the prison makes it even worse to film than just shooting outdoors, as the set is constantly cold and dry.

"I came into the show as a fan," David Morrissey, who plays The Governor, said. "I've known Andy a long time so when it came on I was glued to it. I knew it had a great cast, great writing, great production values, but you can never know until you get on set, it's also a great crew. To join that team has been such a blessing for me."

He added, "I've always wanted to come to Comic-Con so to come for the first time and be sitting on the stage answering questions like this is amazing."

Finally, Andrew Lincoln said of being Rick Grimes at this stage in his development, "I was reading The Road. I've saved reading that until now, and I think Rick is very much at that point. The time scale is very similar, in that book he's pushing people away to protect his son, and in doing so loses his humanity. Rick has isolated himself, from his wife from everyone, and i'm currently going bats--t crazy. But this season will see him realize he does need other people to survive."