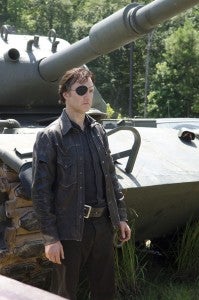 Scott Gimple, the showrunner for AMC's The Walking Dead, just gave an interview with The Hollywood Reporter in which he teased quite a bit of bloodshed in what sounds like it could be an angry and chaotic midseason finale--one that might see Rick and his group coming face to face with some familiar characters from the comics yet to make an onscreen appearance.

"There is a potential to see them sooner rather than later," Gimple teased of Abraham, Eugene and Rosita, already announced as being played by Michael Cudlitz, Josh McDermott and Christian Serratos.

He also said acknowledged that there are an awful lot of storylines ready to come to a head in this week's episode which, as we've seen in previews, features The Governor showing up to take the prison...with a tank.

"Michonne and Daryl will not react well if they were to see The Governor -- they're not all the way healed from their experiences with him," Gimple warned, adding that the show is not going to ignore the fact that the last time we saw Rick Grimes and his group of survivors, he had kicked Carol out and hadn't yet told Daryl about it.