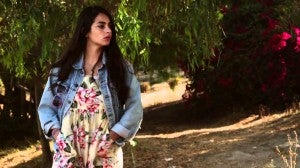 Alanna Masterson has inked a two-year deal with AMC that will see her recur on The Walking Dead in the upcoming fourth season and then, potentially, return as a series regular in 2014's Season Five.

Deadline has the details--or really, lack thereof since AMC is keeping almost everything under lock and key, but they're speculating that she may be playing Tara Chalmers from Robert Kirkman and Jay Bonansinga's novel The Walking Dead: Rise of the Governor.

If that's the case, it might lend some credence to the idea that the trilogy of Governor-centric novels will be integrated into the current season, playing off the idea that while he was vicious last year, David Morrissey didn't look or act much like The Governor fans have come to know from the comics.

Given the open-ended nature of Chalmers's character arc in the novel (we don't know what happened to her, or even if she survived), it's also worth questioning why a minor character like that would have the option of being upgraded to series regular in the fifth season if they didn't plan on taking her in a very different direction in the show. Whereas Tara was heavyset and bull-headed in the novel, Masterson is conventionally attractive and it may be worth asking whether they're positioning her for a potential role in 2015's as-yet-untitled Walking Dead companion series.

The flip side of that, of course, is that on The Walking Dead, they may sign you to two years, but that doesn't mean you'll make it past your third episode.

Christian Serrota of The Twilight Saga was recently signed on to play Rosita Espinosa, hinting that another group of survivors may soon meet up with Rick and his crew.

AMC's The Walking Dead returns for its fourth season on October 14. Since the show has already had its midseason production hiatus, it's likely Masterson will appear in the back half.