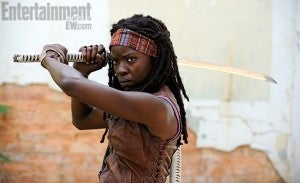 character featured in a recent issue of Playboy has taken it all off--her hood and parka, that is.

In one of the first official looks at the third season of AMC's The Walking Dead, fans finally can get a good look at Michonne as she'll be depicted by actress Danai Gurira in a story run at Entertainment Weekly's website earlier today.

The fan-favorite, sword-wielding badass made her first (and very brief) TV appearance in last year's finale, hooded and robed and chained to a pair of declawed and defanged walkers. One of the longest-running characters in the comics, Michonne has been one of the most consistently -requested character since The Walking Dead began to air. She walked into the comics just as mysteriously as she did on television, and while eventually we came to learn a few things about her, the character's full origin was not published until a recent spread in Playboy, timed to coincide with the season finale.