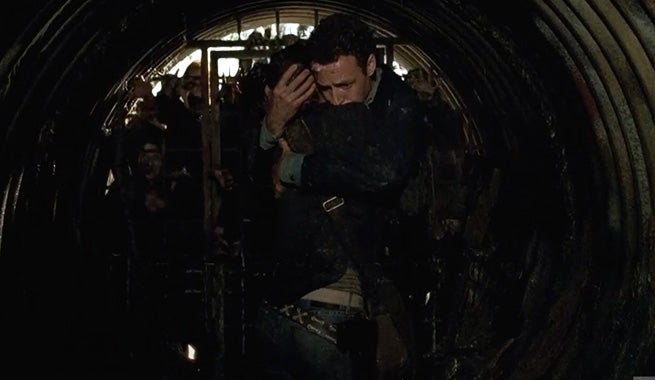 Spoilers follow if you have not yet watched season six episode five, Now, of The Walking Dead.

In tonight's episode of The Walking Dead, one character revealed a somewhat expected truth about herself, but it still sent shockwaves through every member of the audience. Maggie decided to tell Aaron that she is pregnant.

Speaking to Ross Marquand, who plays Aaron on The Walking Dead, I wanted to know why Maggie told Aaron about her secret. "I think the backstory that we created was even though we haven't seen them on screen together all that much aside from that first meeting and then of course the barn," Marquand started, "We decided that because Maggie saw a goodness in Aaron from the beginning, the two of them just bonded and they probably hung out a fair amount within the walls when they get back. I think that the two of them are actually pretty tight now. I believe that's the reason why she feels comfortable telling him this piece of news. This is a big piece of news, she's really kept from the others and no one else knows about it, at least in Aaron's mind and I think she tells him this not only because he's about to open that gate and risk their lives and her unborn child's life because I think the reality of her pregnancy is catching up to her in that moment."

Those of us left yelling at our TV as Maggie decided not to go out looking for Glenn can find some resolution from Marquand's perspective. "She's realizing, 'It's not just about me and Glenn anymore. It's about this baby and I have to do everything I can to protect this baby. I think leaving the gates of Alexandria right now is not the best thing for us,'" he says.

As for whether or not Maggie and Aaron will tell other characters about the bun in the oven, it may be some time before that happens. "I think as time goes on she'll reveal it, potentially, to other characters, but for now, I think she's certainly keeping that news very much to herself," Marquand says with good reason. "It's a risky thing to have a baby in the apocalypse as we've seen with Judith. Carl lost his mother at childbirth. Imagine all the things that we take for granted like baby formula and diapers and everything else - that just goes out the window with the apocalypse. It's a real challenge. It's a real struggle.

"I think it's so beautiful that you have this incredibly hopeful moment with these two people that are framed by death," Marquand said of Aaron and Maggie's scene in the sewer. "We're just kind of framed in that gate with nothing but death around us and walkers just reaching through trying to grab us and there's these two people bonding over guilt and shame and ultimately, also optimism. They're seeing past their guilt and shame and there's a real chance to grow from this. Maybe not necessarily by fighting today but by fighting in the future to protect the future of our community."