With the release of Thor: The Dark World this week, Marvel Studios have officially entered the era of the sequel; of their next two years of releases, there are a pair of sequels lined up with promises that at least Thor and The Avengers will have third films, based on actors' existing contracts.

Sequels are tricky; you're suddenly bound by continuity, and in the case of the Marvel movies it isn't just your own continuity from the first movie; your sequel has to jive logically and logistically with every movie the studio has made since the end of the Blade franchise.

Meanwhile, if you're replacing directors (which, in the case of Thor 2 they are), you've got to blaze your own trail in terms of creating a look and feel for the movie that's your own--one that both meshes with the world of the first movie and distinguishes itself from it. 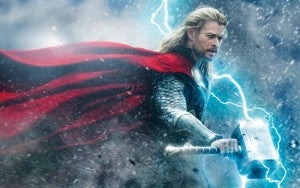 Here, a lot of effort and energy is put into expanding Asgard and the Nine Realms, and it's largely done beautifully...although not a whole lot of it feels particularly original. There are obvious influences in the film--everything from the other Marvel films to Star Wars and The Matrix--and of course Game of Thrones finds in this film a spiritual sibling, since that's what Alan Taylor is best-known for and, almost certainly, what was key to getting him the job.

The performances are stellar across the board; if there is any character who lacks a bit, it's Malekith himself, who comes off less sympathetic and more generically evil than Loki ever has. That's a necessary evil, probably, as the stakes here have to be higher for the second film and also because so much of the time that filmmakers could spend building a clever, nuanced villain is still spent on Loki, who of course gets more screen time here than just about anybody. It's difficult to tell whether Malekith's shortcomings are the fault of Christopher Eccleston, or just of the writing; Eccleston certainly doesn't communicate the same kind of emotion that the rest of the cast do, but it almost seems as though his character isn't meant to. Taylor himself has made reference to the fact that some of the most painful cuts he had to make en route to a final cut of the film were ones that developed Malekith and Algrim, his right-hand man, more fully. 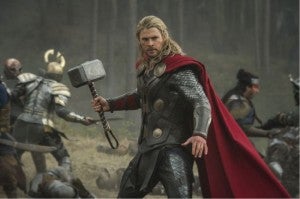 Most fans will fall for this movie--the plot itself is solid, the lead characters are all interesting and likable, the "big moment" in the third act is a game-changer for the Marvel Cinematic Universe and the mid-credits sequence sets up one of the most hotly-anticipated films of the next two years. Chris Hemsworth and Tom Hiddleston are particularly strong in their roles; you can see that the pair of them love the characters and are having fun, which is essential in crafting a world where all the humor we've been promised doesn't feel out of place, in spite of the higher stakes.

That humor works well, too; it feels, almost, a bit like an '80s action movie. The humor never overwhelms the story itself, but you can look to cinematic touchstones like Die Hard to get a feel for what kind of vibe Taylor was going for and, largely, accomplished.

The script deserves a lot of credit in making the movie feel grander and more impressive than it necessarily might have. There are a lot of characters working at cross purposes in this film, and yet the story feels pretty straightforward and never devolves into the mass of beautiful people doing inexplicable things that you see in other big-budget ensembles like Ocean's 12.

Where the movie misstepped, in my opinion, was the gritty, in-your-face feeling that Taylor kept promising, using Game of Thrones as his case-in-point that he knew how to manage it. That feeling never really developed. Instead, most of the combat felt very staged (let's face it--it would have to be, since they were trying to minimize digital effects and so you had practical Elves and Kurse and the like, all dressed up in bulky costumes that required hours of makeup) and impersonal. Graphic Policy, a comics-and-politics website, described it on Twitter as being reminiscent of the Star Wars prequels, saying that both the special effects sounds (particularly the spacecraft) and a general sense of the fight choreography felt oddly "comfortable" and reminiscent of those films.

These may sound like nitpicking--and they are. Thor: The Dark World is a good film, though maybe not a great one. Its weaknesses come from what feels like a lack of either a coherent vision or the will, skill or freedom to pull off that vision on the part of the director. Contrast this to Iron Man 3--a great film but arguably not a very good one in many respects--and one almost has to wonder whether after having given Shane Black a lot of freedom on that film, Marvel pulled back the reins a bit on Taylor. The result is a movie that plays it a bit too safe for my taste, but is likable, engaging and entertaining.