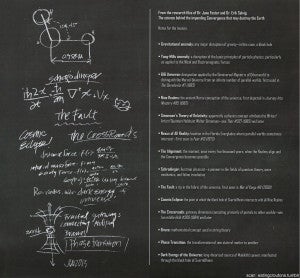 Shortly after Thor: The Dark World hit theaters, ComicBook.com took our swing at the chalkboard seen behind Erik Selvig in the lunatic asylum.

Now, there's an official handbook of sorts--a list of notes included in Thor: The Dark World - The Art of the Movie (via CBM), an official book collecting concept art and the like. And it basically confirms what we thought might be on the board and adds a number of other little gems we didn't catch, as well.

You can see the image at right, which not only confirms some of our suspicions about The Crossroads, The Fault and Universe 616, but adds a few others as well, such as the [Walter] Simonson Theory of Relativity and even some real-world science terms.

Thor: The Dark World's Selvig Chalkboard Gets an Official Rundown