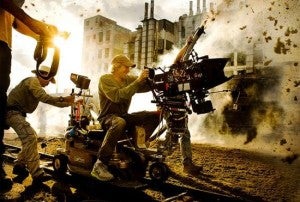 The fourth Transformers film (and last which Michael Bay plans to direct) is in process of wrapping up filming in Chicago this week. According to a source, the “mother of all bombs” explosion will take place on Wednesday afternoon in Chicago around the silos on S. Damen Avenue and W. 29th Street in the Pilsen area.

Even though the film is shooting in Chicago, it’s actually Hong Kong that Bay is likely blowing up in the movie. Many of the scenes that Bay has filmed so far in Chicago have been set in Hong Kong with Hong Kong flags and Chinese street signs.

Transformers: Age Of Extinction Will Have Mother Of All Bombs