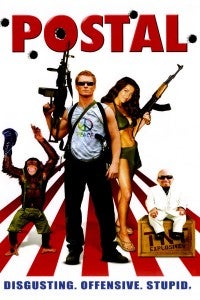 Alright--now if this guy gets funded, society collectively loses the right to complain about Zach Braff ever again.

Uwe Boll, often referred to as the worst director in the last 20 years, has taken to Kickstarter in hopes of getting a sequel made to his 2007 film Postal, which he describes as "the best movie of all time."

Of course, he's exaggerating for comic effect. There's a second video, also available on the Kickstarter page but not the official Kickstarter video, in which he's a bit less facetious. You can see both below.

Boll, a Razzie Awards winner for Worst Career Achievement, has frequently used generous tax subsidies from his native Germany to offset the cost of his films, many of which don't turn a profit at the box office. The original Postal, made for $15 million, made only $150,000 at the foreign box office and went direct to video in the U.S., where numbers are harder to track.

He's also a polarizing figure offscreen; he challenged a number of his harshest critics to boxing matches, winning all of them in spite of the fact that most of the competitors claimed they were not aware that it would be a serious fight rather than a PR stunt and photo shoot. That misapprehension,t hey claimed, was supported by the fact that Boll had offered professional training ahead of the matches, and such training never happened. Boll responded by saying that his opponents should have taken the time before the matches to train regardless. He once said that he would retire from filmmaking if a petition to convince him to do so reached 1 million signatures. It stalled out around 350,000 signatures, and a competing petition that Boll endorsed--"Long Live Uwe Boll"--topped out at just under 8,000.