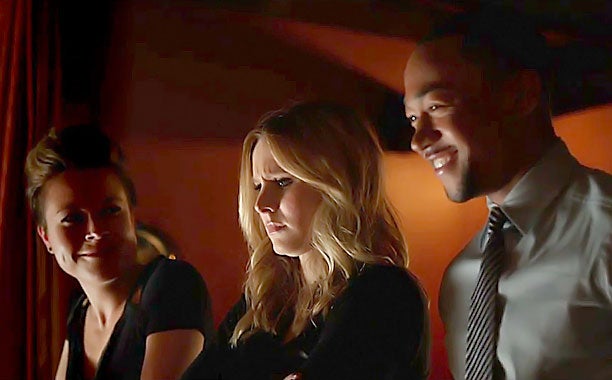 Veronica Mars, the Kickstarter-backed movie that will revive the long-cancelled UPN/CW TV series, will be released to theaters on March 14, 2014--one year and one day after the launch of the Kickstarter campaign--Warner Bros. announced today via Entertainment Weekly.

As part of the announcement, EW also has a 90-second clip available on their website, although they have disabled embedding.

“Warner Bros. had this date circled for quite some time and hoped it would stay open,” said series creator Rob Thomas, who directed the film. “Luckily, no other teen detective movie decided to open in the middle of March.”

Thomas has become an in-demand commodity since the high-profile success of the campaign, writing and/or producing at least two pilots for 2014, including an adaptation of DC Comics's Vertigo title iZombie.

As EW notes, Warner Bros.'s original distribution plan called for Veronica Mars to get a limited engagement run in just a few cities before becoming more widely available via video on demand and other digital platforms. Thomas says today that the studio will instead give the film a nationwide release (with the number of screens still to be determined).

“We’re not going to dribble it out there,” says Thomas. “There are smart ways to do a movie of this size — and we chose none of them. We are a low budget movie with big set pieces and 60 speaking roles. A murder mystery in a house would have been more cost effective. But I think we have managed to pull it off.”

In the movie, Veronica returns to Neptune, California, after 10 years away to help Logan Echolls, her former boyfriend, beat a murder rap. Returning cast members include Enrico Colantoni as Veronica’s father, Tina Majorino and Percy Daggs III as Veronica’s best friends Mac and Wallace and at least a dozen more.