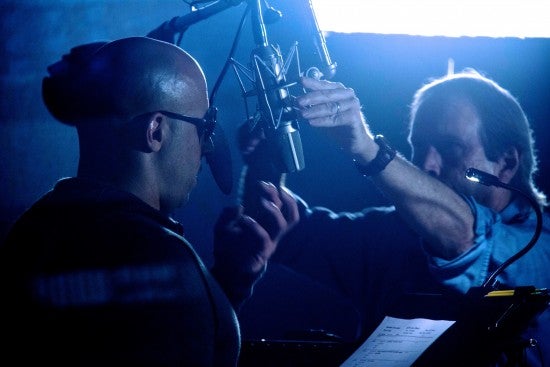 A few hours ago, actor Vin Diesel posted a photograph of himself to Facebook, along with a message explaining that the man with him in the photo is Doc Kane, with whom Diesel worked on The Iron Giant.

The pair worked together again recently on Guardians of the Galaxy, and Diesel not only had nothing but enthusiasm for the experience, but is very enthusiastic about the film's prospects--going so far as to say he believes the film might "break Marvel records."

Here's his post: Some of you may remember the character I voiced back in 1998…

Last month I had the opportunity to voice a new character, on the Disney lot… and I was shocked to see the same sound engineer, Doc, who was there when Brad Bird was directing me 15 years earlier, as the Iron Giant.

As artists we are susceptible to clocking omens… and this was a great sign.

As I worked, with James Gunn, breathing life into GROOT… I saw more and more of the film… wow.

P.s. This summer's Guardians of the Galaxy, is not only going to blow you away… it could very well break Marvel records...

Grateful for the opportunity to make magic...

Of course, The Iron Giant is one of Diesel's most beloved roles among fans--and one that came up immediately when speculation began that Diesel might play either The Vision or Groot, implying voice acting rather than a traditional live-action performance. While Brad Bird is best known for his work with Disney, The Iron Giant was a Warner Bros. movie.

Vin Diesel Talks His Guardians of the Galaxy/Iron Giant Connection