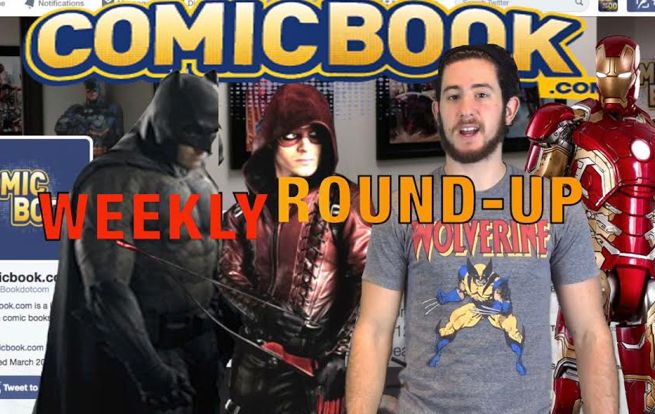 Comicbook.com’s weekly round-up brings fans a collection of the biggest stories of the week in comic books, movies, television, and video games. For the week of December 19, host Brandon Davis covers the first look at Ben Affleck's batsuit in color, Arsenal's bigger role on Arrow, The Walking Dead spinoff in L.A., and more.

Earlier this year, Zack Snyder gave fans their first black and white look at Ben Affleck in the new batsuit for Batman vs. Superman: Dawn of Justice. Following the release of that image, countless fans made their own renditions of the image in color. This week, Snyder’s company released the same image, only with color, providing us with the first official look at the Batsuit and Batmobile in color.

Spoilers for Arrow coming up if you haven’t seen the midseason finale! With Oliver Queen presumably dead after his duel with Ra’s, a lot of fans are wondering what will happen next. Roy Harper, Arrow’s sidekick, played by Colton Haynes, will have to step up in big ways. Arrow executive producer Mark Guggennheim promised that Arsenal will finally get his due in the coming episodes. Guggenheim told Entertainment Weekly that Harper will have more screen time and I’m quoting, “stuff in episodes 10, 11, and 12 that’s pretty dang gangbuster.”

This week, Hot Toys released images of their Iron Man MARK XLIII Die Cast figure from Avengers: Age of Ultron. According to their description, the figure is a highly detailed and specially crafted based on the image of Robert Downey Jr. as Tony Stark in Avengers: Age of Ultron. It is equipped with a diorama base with a damaged Mark I suit and LED lights. A full gallery of the figure can be found at Comicbook.com.

Earlier this week, Comicbook.com reported that the Walking Dead companion series was scouting location in the Los Angeles area, under the project name Cobalt. Soon after, it was confirmed that the series will be set in Los Angeles, according to TVLine. The pilot begins shooting in early 2015, and still minimal details about the plot have been revealed.

So those are the biggest stories of the week, but for the rest of this week’s news make sure to head over to Comicbook.com. Which story from the week do you think was the biggest? Are you going to middle earth one last time to see The Hobbit? Let us know in the comment section! On behalf of Comicbook.com, I’m Brandon Davis, and I’ll see you all next week!