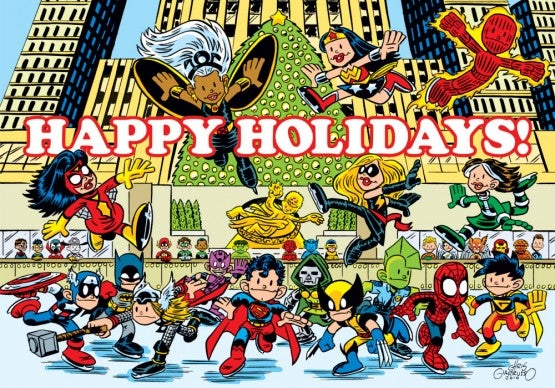 While making comics for a living seems like the gift that keeps on giving, even the industry's top creators have that special something on their wishlist. With one final night left for Hannukah, and Christmas just mere hours away, we reached out to the comics industry's top creators to see what their hearts pined for this holiday season.

Unsurprisingly, it was the nonmaterial things that they wished for the most. Take a look below to see what might make the season just a little bit brighter for comics' top writers, artists, and editors. With any luck, their wishes just may come true. It is the holidays, after all.

Over the last decade, I have spared no effort in teaching my children about the true meaning of Christmas…Christmas is about watching Doctor Who. So I'll be watching the new Who Christmas episode, as I have for several years now. And what more could I want than that?

I want the kidnapped Kenyan school girls to all be rescued and returned to their families. My Christmas wish for the men who took them is somewhat less than charitable.

I want a week in the desert with my wife and kids, where all we do is read and draw and walk around in the dust and eat. This time of year is very hectic and wet around here [in Portland, OR.]

Every year it gets harder and harder to decide what I want for Christmas. I think it's because the older you get, the more you have accumulated all the material possessions you could possible ask for and the more important the intangible things like family, time and health become. If I could have anything for Christmas this year it would be a peaceful and healthy 2015 for my family and friends. My Christmas miracle would be that my best friend, who became a quadriplegic 18 months ago, regain even a little of the mobility she lost in a boating accident.

I have everything I want or need, with other wants & needs happily on track in the pipeline. So, all I want for Christmas is absolutely nothing, except...health, safety, and continuing happiness, with big bursts of joyful laughter, for everyone.

Clearing off that "to do list" for the holidays! Getting a drawing, cover, page, or design in to everyone that wants or needs one from me would be an awesome gift.

Christmas is my favorite holiday (followed closely by Halloween, but I digress). It has always been a huge production at our house. There are wrapped presents under the tree, and Santa leaves an additional pile. Both my parents and my husband's mom live in town, so rather than having a leisurely time at home, we spend Christmas Eve and Christmas Day visiting a billion relatives, eating enough food for a small village, and exchanging gifts. SO many gifts between the three Christmases.

Now, you should know that our son just turned 13 in early December, so he has already gotten a bunch of presents each month. He's already jaded, and as a newly minted teenager, his gift list just gets crazier each year. This time, it was a list of the most obscure games imaginable--because he already has everything else.

Both the husband and I are a bit harried this year--Mike writes game scripts and novels, and I'm trying to finish up a project for Marvel--so we're late. Just got the tree up. Just got the shopping done. Just got the presents wrapped. Our son came downstairs as we proudly basked in the Christmas glow, took in the scene, and rolled his eyes and asked, "Is that it?" FULL TEENAGE DERISION, and he's only been a teenager for about 12 days. So, this Christmas more than any other before I wish to be "of good cheer", which I think is Old English for "full of booze".

What Are Comic Book Creators Asking For The Holidays This Year?