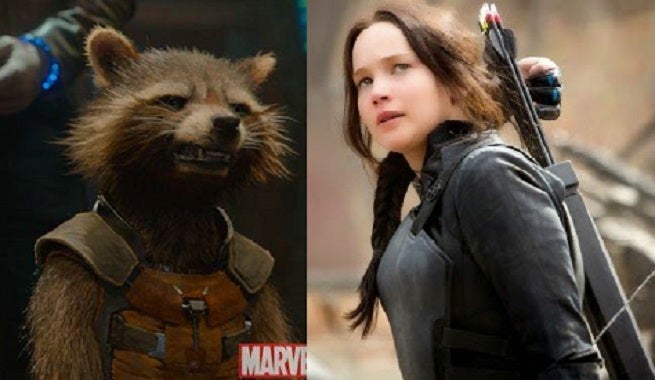 Ever since Guardians of the Galaxy became the top-grossing film of 2014, many analysts (ComicBook.com included) have stipulated that it would likely not hold onto that title, since The Hunger Games: Mockingjay Part One was considered a lock to open around $150 million and go on to generate something in the neighborhood of $400 million. With a soft opening this weekend, though, there's now speculation that Guardians of the Galaxy might actually retain the year's top spot as the first half of Mockingjay might not have quite enough substance to hold up against its predecessors.

The Hunger Games, originally expected to open around $75 million, shocked everyone in 2012 by opening at $152 million. It went on to draw $408 million domestically. The Hunger Games: Catching Fire bested it in both categories, opening at $158 million for a total haul of $425 million. The $123 million opening for Mockingjay Part One is down around 22% from Catching Fire...which is where the theory that it will overtake Guardians begins to be tested.

But Guardians, being a movie that's performing well out of the top ten at this point, hasn't reported its weekend box office yet. Last week, it made more than $300,000. It's likely that if the film remains in some theaters for another week or two, it will generate at least another $500,000 before the Blu-ray is released December 9 and totally submarines its box office potential.

However, it's more complicated than that. The third installment in a series often struggles to retain audience enthusiasm, especially when it is not the final installment.

Mockingjay itself is an adaptation of the book generally regarded as the least impressive of the Hunger Games trilogy, and reviews bear that out for the film; Mockingjay has scored just 67% positive reviews at review aggregator Rotten Tomatoes, making it the first film in the franchise not to be "certified fresh." The Hunger Games scored 84% (17% higher) and Catching Fire accomplished 89%, besting Mockingjay by more than 20%.

All of these factors have combined with the underwhelming first weekend and a solid slate of upcoming releases to lead Box Office Mojo to project the film will end up with closer to $300 million than the $330+ million it would need to overtake Guardians.

Could something else rise to the level of Guardians? It seems unlikely. The Hobbit: The Battle of the Five Armies would be the most obvious candidate, but the second Hobbit film made just $258 million, meaning that in order to surpass Guardians, the third one would have to do better by about a full third -- or $30 million/10% more than the first installment of the franchise.

Some may point to director Ridley Scott's Exodus: Gods and Kings as a film with huge box office potential this year as well...but a similar film -- Noah from Darren Aranofsky, also a gritty Bible retelling -- made just over $100 million this year, and Scott himself has never had a film that grossed $200 million at the box office, with his most recent blockbuster, Prometheus, weighing in at around $125 million. The Penguins of Madagascar could generate close to $300 million, perhaps -- its previous installments have all hovered around $200 million, without the 3D premium, and of course last year, Frozen turned out to be the year's biggest movie at the worldwide box office by virtue of its long legs in theaters...but it's a longshot and if it were to happen it would be the kind of totally out-of-the-blue success that Guardians has already had.

With Hunger Games Falling Short, Guardians Of The Galaxy Could Win The Year At U.S. Box Office