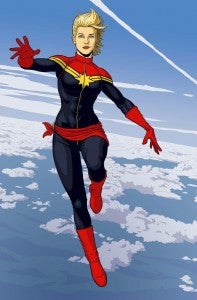 While many people may think that Sunday at San Diego Comic-Con would be a slow day, Russ, Zach, and I are still finding plenty of things to cover and bring to you guys, right here at comicbook.com!  One of the early panels of the day was centered around the women of Marvel, specifically the female talent behind some of Marvel's biggest books and news events.  Jeanine Schaefer moderated the panel.  Sana Amanat was also present, as well as Kelly Sue Deconnick, Marjorie Liu, Janet Lee, and Judy Stephens.

The panel began with an impromptu Happy Birthday sing to Deconick, and a teaser that a few lucky fans would get to read Captain Marvel #1 before it actually hits the stands.  After silencing the debate about the lack of women's interest in comics with a resounding showing of hands from the female audience members for their interest in superhero comics, Schaefer opened up the discussion. She talked about the necessity of this panel in particular, as they always reevaluate the role of it.  "I think comics rock, but we have so many departments that you can find a role in many aspects of the comics industry," said Stephens, who manages the AR app and is a photographer.  "Some people think this panel is redundant, but we are women in a male-dominated industry, so I think it's important to show that spotlight.  We have so many ideals about freedom and equality, and we're further along, so we need to keep having this dialogue," added Amanat.

Issues of pay were brought up by the audience, with Stephens adding, "we have some very powerful women in our company, and the right people notice that we are there and that we will get our day.  As a female photographer, it can be hard."  Liu said, "It's important that we keep breathing life into publishing, be it prose, comics, whatever, our voices need to be heard."  Deconnick added, "sometimes people are allowing women to keep money on the table when it comes to comics, and that's not right."

Schaefer asked about how the panel got involved in comics.  "I have no business being in comics, I started with cartoons.  I think that's a huge reason so many girls get into comics.  The fact that it was so daunting when I came into it, and had a passion for visual storytelling, and I had some people tell me that because I was a woman I knew nothing about comics," said Amanat, "One of my bosses gave me confidence, a female editor, and saw something in me and took me to the next stage.  I encourage people to talk to those in the industry and make those connections."  "I started reading comics because I grew up in military culture and they're big in that world," said Deconnick.  "For me it was the old X-Men cartoon in the 90's," said Liu, "One day I wandered into this dusty comic book store, and he just let me wander and I bought a bunch of comics, brought them to my dorm, and that was it."  Lee had a bit of a different story, "My neighbor had all these comics in his basement, like Archie and comic strips, so I was hooked at five.  My boyfriend read X-Men, so I read X-Men."   Stephens commented that she got started as a web designer, and was a manga reader for years before discovering Ultimates.

Amanat talked a bit about the sexualization of women in comics, "I remember seeing all the sexy images in Catwoman #1 and thinking 'this is a number one'.  I didn't think that was what we should be seeing in a number one issue.  I'm against that kind of representation in a number one."  Liu weighed in, "I think she's been reduced to a blow-up doll, and Starfire too."  There was however praise for the work of the Bat-family of books, "I will say they have done a tremendous job of cultivating a good readership among women with Batgirl and Batwoman, and I think those people will like Captain Marvel s well," added Deconnick.  In speaking of Captain Marvel's and costume, Deconnick went a little into that, "I was pitching Ms. Marvel in the old costume and the Ms. Marvel name.  Steve Whacker wanted a book that he would not be embarrassed to give his daughter.  As a five-foot tall woman, I am not estranged from fantasies of power, and there are lots of injustices that I want to shoot down.  Having comics women do those things is good.  With the costume, the idea, first and foremost, the best thing we can do is make the costume fit the character.  When I was working on the first issue, there was a funeral, and it seemed weird to me to have her go there dressed in that look.  The idea to change her look came up, and the idea to do something that looked like a flight suit came up.  It seemed wholly appropriate with her background in the military to look like that."

The panel then turned to questions from the crowd.  A question about the difference between the number of DC female centered titles versus the number of female series from Marvel came up.  "I think that as DC an Marvel fans, we are so centered on our superheroes that we forget that we publish books that are outside of that world," said Deconnick.  "I think Marvel doesn't want to do that just for the sake of doing it," said Amanat, "we just don't sell those titles for some reason.  They don't tend to get picked up by readers, male or female.  I think it's more about the characters.  For example, I think you see Kitty Pryde leading the X-Men in Ultimate X-Men, but we don't have to call it Kitty Pryde.  You have the Dazzler team and you have a lot of other books like this," said Amanat.

Another question was about the possibility of seeing Spider-Girl cross into Captain Marvel, "I would love to see her there, and I can tell you that we will be having Monica Rambeau showing up as well.  I'd love to include some more female heroes in that book," said Deconnick.  Another fan asked about including Carol Danvers in the Marvel film universe, "No idea," said Deconnick, "but if she was I would be there screaming my head off and eating popcorn with you!"  Any plans for more female superhero television series, animated or otherwise?  The panel really was unable to answer due to their role in the publishing world.  A thought-provoking question from the audience on what is the right way to be respectful of introducing female characters into comics.  "I don't care if they are villains, hypersexual, particular personality traits, etc.," said Deconnick, "what I care about are female protagonists.  If they are not things to be rescued, plot points, or rewards, then I am content." Liu went onto to talk about the danger of people trying to lump all female readers into one category.  "I would say look at what you like to read in general and then work from there," said Lee.  Deconnick thought that there could be more things done on the publishing end to make comics more accessible to women.

The discussion of perception of big Marvel events and the reader was discussed, with a fan commenting that there didn't seem to be a lot of coverage for women as being centerpieces for the events.  Deconnick and a couple of others countered that events such as Avengers vs. X-Men, Avengers: Disassembled, House of M, and others came up.  There was some discussion as to if Marvel was doing something wrong with the way that these things are perceived.  Costume discussion was next and how the female characters are designed and drawn.  The debate over sexiness vs images of heroism was discussed, with a younger fan talking about how limited her options are at times for dressing up as her favorite characters.

The panel ended with a final thank you to the very full crowd and the encouragement to check out Captain Marvel #1 when it lands in stores.

Women of Marvel Panel at Comic-Con Offers a Different Perspecitive