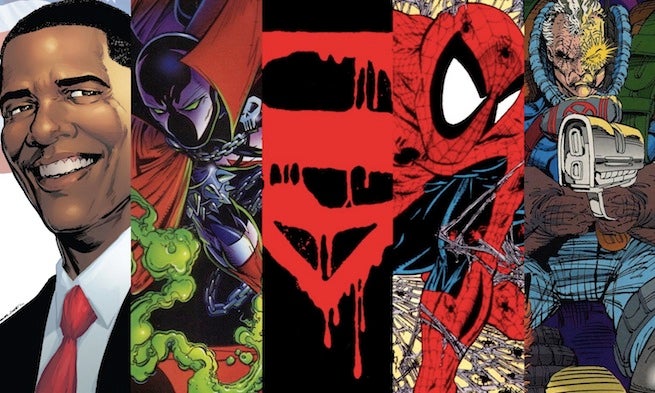 With more than 1 million advanced copies ordered for Marvel's Star Wars #1, which releases this week, there hasn't been a comic book this buzzed about since the peak of industry sales in the 1990s.

Or has there been? Thanks to the rise of social media, and some savvy marketing techniques from the publishers, the comic book industry has pumped out a number of buzzworthy books over the past 25 years, that have both sold extraordinarily well and garnered mainstream media attention for their contents. This list celebrates those books and ranks them in order of the buzz that they generated. Every one of these comics has left a legacy on the industry and is still being talked about today – in some instances 25 years after the fact. Only time will tell where the new Star Wars may potentially fall in a list like this, but based strictly on sales, it's already well on its way to being one of the most buzzed about books in the medium's history. 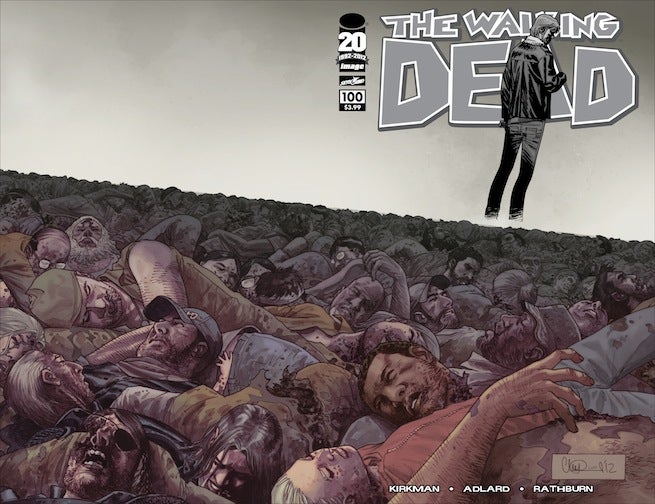 In hindsight, Robert Kirkman's Walking Dead #1 should be considered one of the comic book industry's most important releases of the past 15 years. However, it took the success of The Walking Dead AMC television series, to transform this book into a true buzzworthy phenomena, and one of the biggest franchises in comic's today. As such, when it was time for The Walking Dead to publish it's 100th issue in 2012, it came with a considerable amount of buzz from both hardcore fans and casual ones. A number of A-list artistic talents were brought in to supply variant covers, and the news of a major character's death added only brought more attention to the issue upon its release. The end result of all this advanced chatter was one of the best selling independent comics since the early days of Image in the 1990s. 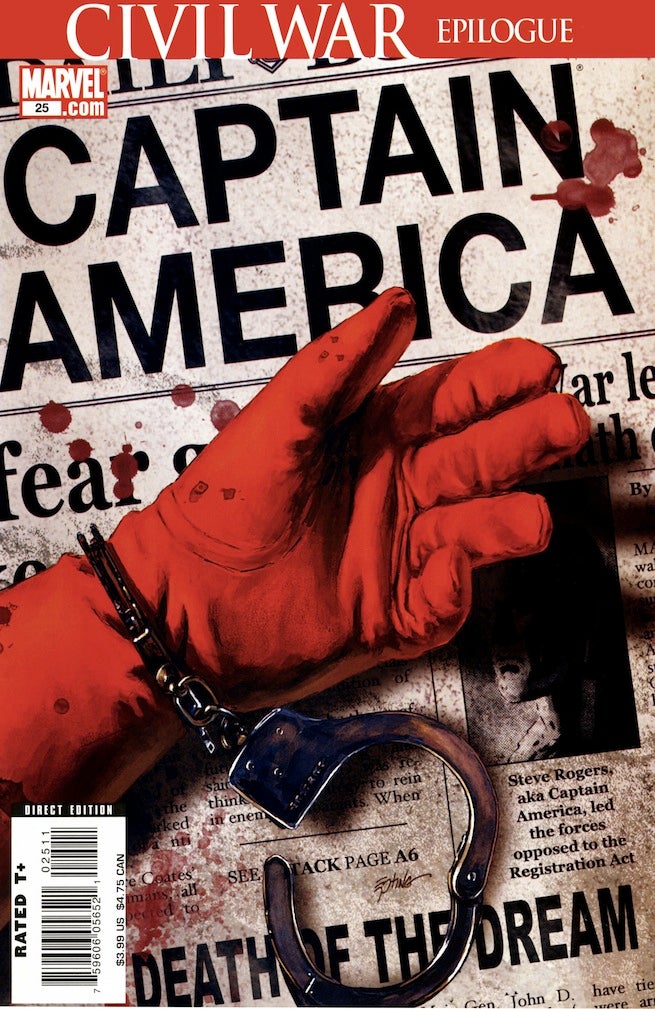 Killing off a major comic book character has become one of the oldest tricks in the book for publishers trying to drum up sales and attract mainstream media attention to a series. However, there was something a bit different about Captain America's death in 2007. One of Marvel's very first superheroes from the World War II era, Cap's assassination came on the heels of the controversial Civil War event (a miniseries that was chock full of buzz itself). Because of the character's stature, this wasn't just another comic book death. The comic, which was wonderfully executed by Ed Brubaker and Steve McNiven, marked the end of an icon – a character that was as American as apple pie. A number of national news outlets reported Cap's untimely demise, and the comic was one of the best selling single issues of the 2000s as a result. 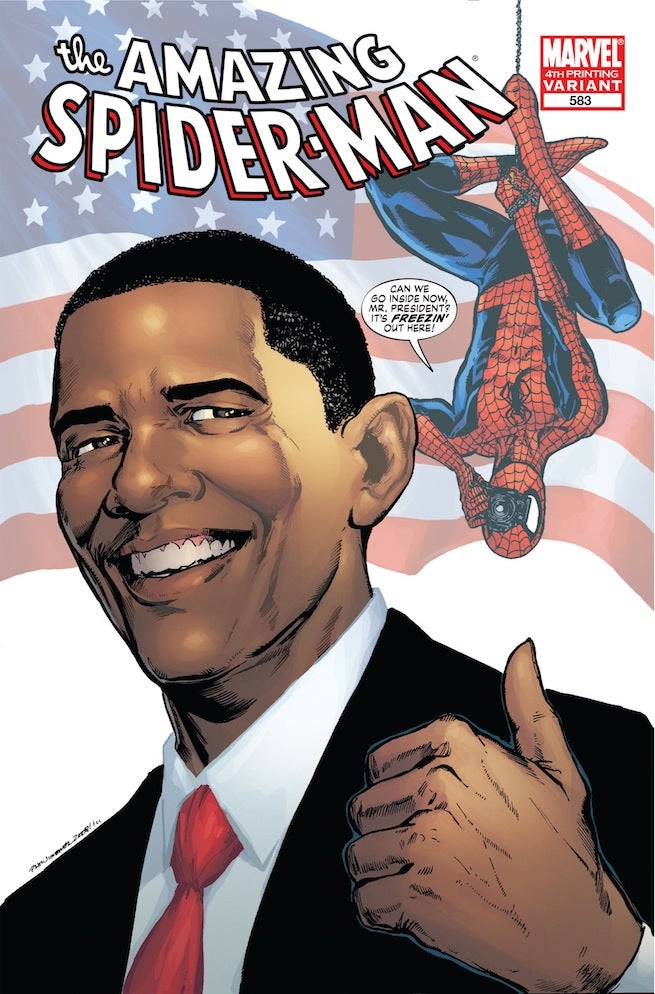 As America's first black president, Barack Obama's election in November 2008 was an absolutely historic event – one that brought together millions of Americans in celebration as evidenced by the gatherings of people across the country in the days after the election. In a bit of a happy coincidence, during the presidential campaign, Obama admitted to being a bit of a comic book fan, specially Conan the Barbarian and Spider-Man. So, it made sense for Marvel to mark this momentous time in history by publishing a backup story in Amazing Spider-Man #583 featuring Obama (who was being impersonated by Spider-Man villain, the Chameleon, 'natch). An illustration of Obama's face was splashed across a variant cover for ASM #583, which instantly sold out of comic shops.

From there, additional printings of the "Obama issue" were released, all selling extraordinarily well. By the time it was said and done, the comic had sold close to 600,000 copies, making it the greatest selling single issue since the glory days of comic speculation in the 90s. 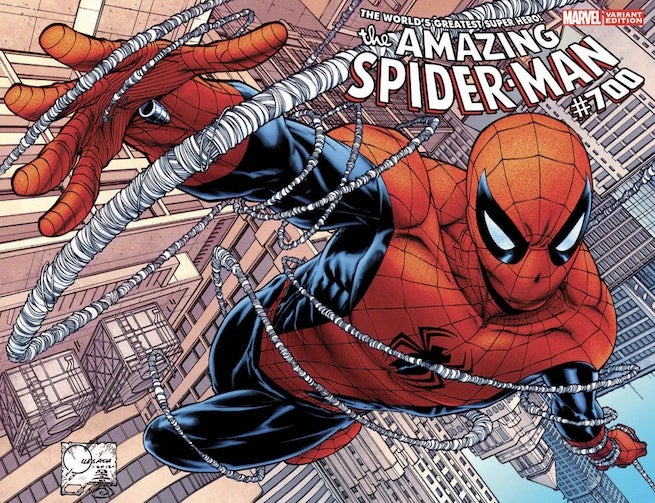 Marvel can thank social media – for better or worse – for transforming Amazing Spider-Man #700 into the comic book event of 2012. In what was being advertised as the final issue of Amazing Spider-Man ever (until they inevitably rebooted it, of course), writer Dan Slott had warned readers in advance that he was going to have to go into hiding for what he was about to pull off in ASM #700. He wasn't joking. Thanks to a pirated copy of the comic hitting the internet a week or so before its release, many readers were worked into a lather over the contents of ASM #700 – an issue that depicted Spider-Man's long-time nemesis Doctor Octopus, defeating Spidey by switching minds and bodies with him and killing him.

The comic sold extraordinarily well, but garnered more attention for the small, but vocal faction of readership that took to Twitter and Facebook to announce their displeasure, and in some instances, threaten Slott with bodily harm. It was an ugly scene, and one that could have only come in an era where fans seemingly have unlimited access to creators via social media outlets. However, lost in the hysteria was an excellent issue of ASM that helped set up one of the better arcs in the character's history with Superior Spider-Man.

DC made headlines in the mid-1980s when it reset much of its continuity with the publication of Crisis on the Infinite Earths and rebooted many of its most iconic series such as Superman, Wonder Woman and the Flash. However, the publisher one-upped itself about 15 years later when it announced that upon the publication of its Flashpoint event, it was going to hit the refresh button on its entire line of comics. This "New 52" initiative would mark a fresh start for every single comic book series published under the DC banner – Batman, Superman, Green Lantern … you name it. Even historically long-running series like Action Comics and Detective Comics. And the flagship book of this event would be a brand new Justice League series from Geoff Johns and Jim Lee.

Led, in large part, by the success of its new Justice League series, the New 52 marked a triumphant moment for DC and reinvigorated fan interest in the company. For the few months that followed, DC was the big dog of the industry again, outselling its competitor Marvel while also setting the table for its own variation of a cinematic universe that will likely pull in billions of dollars at the box office. 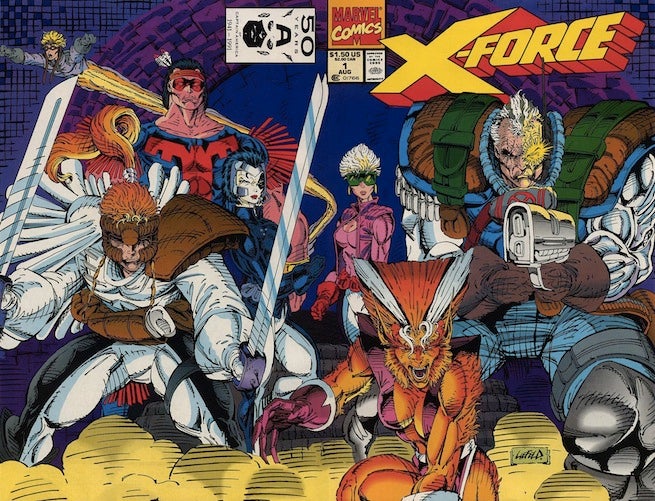 In the early 1990s, artist Rob Liefeld was considered one of the true prodigies of the industry – a comic book rock star if there ever was one. The creator of such phenoms as Cable and Deadpool, in 1991, Liefeld was given the keys to a brand new X-Men spinoff series, X-Force, which was born from the ashes of the popular New Mutants.

Adding to the book's buzz was a marketing gimmick that helped make X-Force #1 one of the greatest selling single issues of all time. Each comic was polybagged and packaged with an X-Force trading card. To collect them all, readers had to buy multiple copies of the comic, something they did to the tune of nearly five million issues sold. 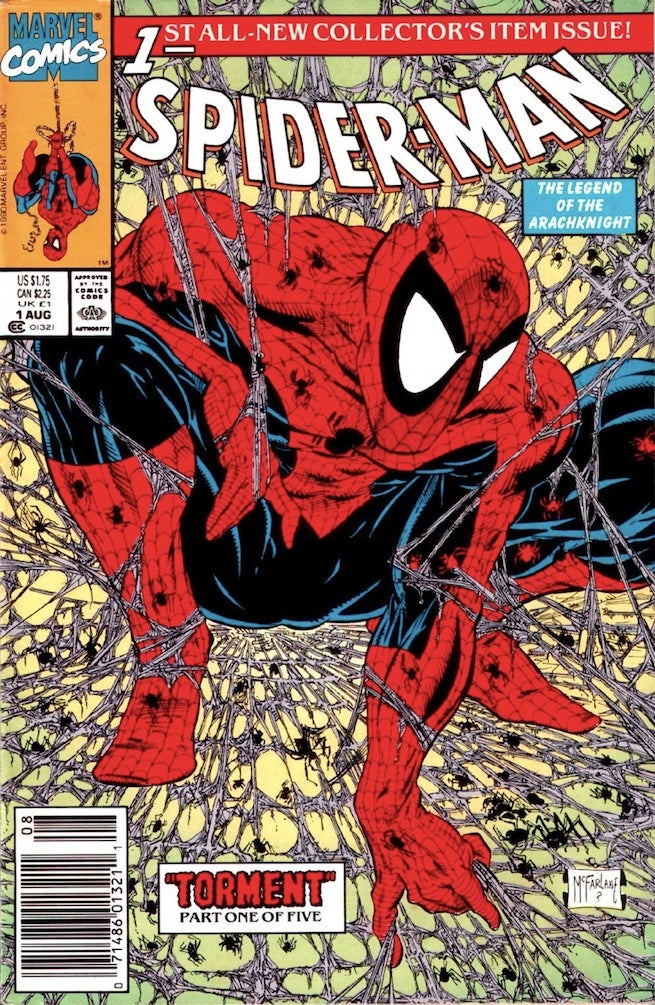 By the time the calendar flipped to 1990, Todd McFarlane was a certifiable comic book industry icon, having moved millions of copies of Amazing Spider-Man and The Incredible Hulk. But the artist was admittedly becoming bored with having to provide pencils and inks for another creator's stories. So he asked his Marvel editor if he could pencil AND write his own series – a book that would later be known as "adjective-less Spider-Man."

It wasn't always pretty (writing-wise), but McFarlane's first issue of Spider-Man was a smashing success, and was temporarily the greatest selling comic book of all time (until it was quickly surpassed by a few of the other entries on this list). Sales, of course, were helped by a variant cover gimmick that featured silver, gold and platinum ink on the front of different issues. To capitalize on the comic's buzz, some retailers reportedly marked up the price of a version of Spider-Man #1 that featured a printing error – the Lizard had a blue-ish hue in a limited number of copies. This was dubbed the "blue lizard variant." 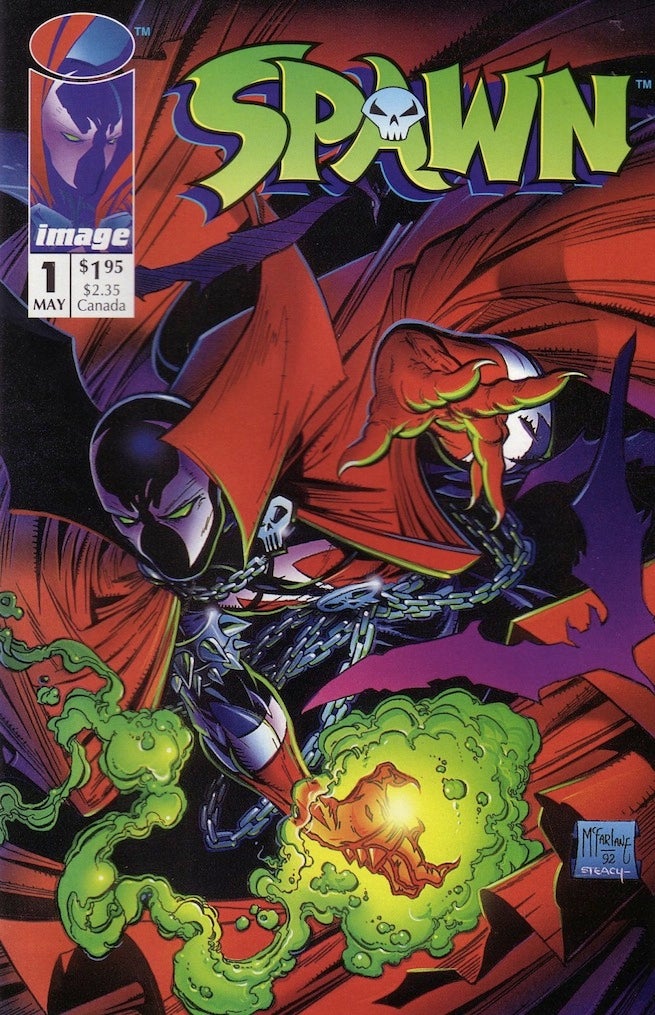 While it was not the very first Image series to hit comic book stores during the dawn of the "Image Revolution" in 1992 (that honor went to Rob Liefeld's Youngblood), Spawn was arguably the most popular and anticipated of the first wave of Image books. As evidenced by the success of Spider-Man #1 (see entry No. 4), Todd McFarlane was hotter than white hot in the early 1990s, with every project that he touched turning to pure gold from a sales standpoint. Spawn #1 was no different. Readers gobbled up the book in droves, and more than a million copies of the issue were ultimately moved, making it one of the greatest selling indpendent comics of all-time. The frenzy for the issue and all things Spawn was only further accentuated a few years later when McFarlane launched his own toy company, selling collectible action figures of the comic's cast. McFarlane Toys was just another way the artist profoundly changed the comic book industry. 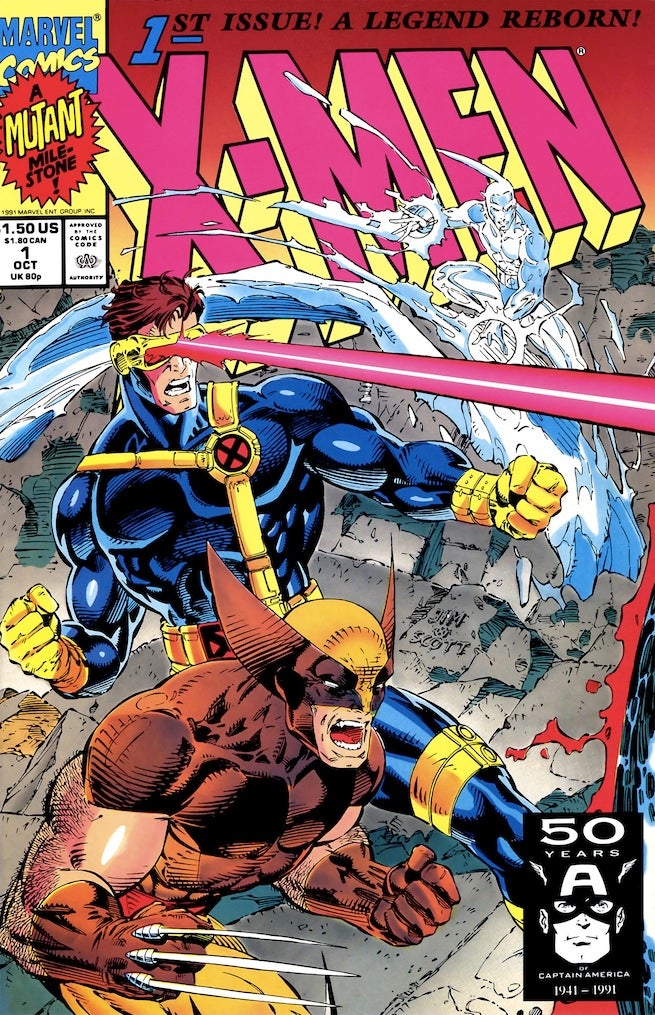 For Marvel in the early 1990s, there was X-Men, and then there was everything else. Charles Xavier's group of mutant superheroes had emerged as Marvel's most popular franchise, an undeniable sales juggernaut that helped build the "House of Ideas" into the biggest company in the industry. It only made sense for Marvel to launch another X-book in 1991, so the company brought together legendary writer Chris Claremont and up-and-coming artist Jim Lee to craft a brand new spinoff series.

Aided by Lee's iconic artwork, which was spread across five different interlocking covers, creating a stunning landscape featuring all of the X-Men battling Magneto, X-Men #1 sold more than 8 million copies, making it the greatest selling single issue of all time – a distinction it still holds today and will likely never be surpassed. In fact, it's hard to believe that there could be a more buzzworthy comic out there, but there is … 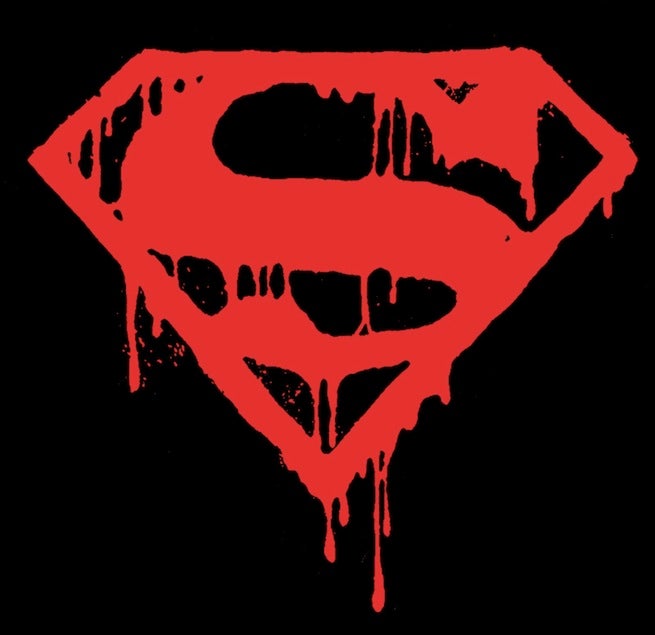 The comic that changed the industry and sent shockwaves throughout the landscape. Yes, it's really not hyperbole to say that about Superman #75, better known as the "Death of Superman."

In the early 1990s, DC shocked its readers when it announced that it would be killing off Superman, a true industry icon whose first appearance in Action Comics #1 during the 1930s more or less marked the debut of the superhero genre. A storyline involving Superman fighting the unstoppable menace Doomsday developed over the span of months, culminating in Superman #75. Upon its release, DC packaged the comic in a black polybag (filled with quirky little giveaways like a Superman armband and a Daily Planet obituary). Readers ate up the death storyline, but was has also figured into the comic's legacy was how collectors bought up and hoarded tons of copies, serving as a catalyst to the speculator movement in the 90s. These speculators believed that by owning multiple copies of the comic, it would one day accrue in value exponentially. Of course, no one ever explained supply and demand to these people, and today, the comic can be safely found in most dollar boxes at comic book shops and conventions across the country.

Still, the "Death of Superman" established the template for how to do a big shocking event storyline. Marvel soon followed suit with similar storylines involving the likes of Spider-Man, Iron Man and Thor and DC dramatically shook up the status quoes for Batman and Green Lantern. And while some critics deride the story as sales-driven fluff, "Death of Superman" and its follow-up, "Reign of Superman" are both revered by many comic book fans, and were a high watermark for the franchise.