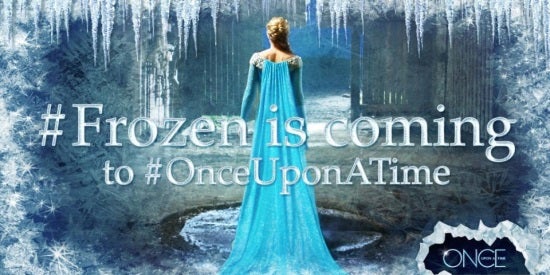 On last night's season finale of Once Upon a Time, a new character made a surprising appearance. Some blue fluid fell into a symbol carved into the ground of a barn. That fluid took the shape of a woman who matches the description of Elsa from Frozen. The woman removed a glove and shot out an ice blast before leaving the barn, leaving a trail of ice behind her. There has been some debate between fans of Once Upon a Time as to whether this character was Elsa from Frozen or, less specifically, the Snow Queen from the Hans Christian Andersen's fairy tale, which Frozen is loosely based on. Theoretically, Disney may have wanted to avoid using Elsa, specifically, to maintain the Frozen brand as the only place to see the character, while still being able to hint at it through a similar but not quite the same version of the character. ABC seems to have put that debate to rest. On Twitter, they released an image of the woman – as seen in the finale – with the message "#FrozenIsComing to #OnceUponATime." It seems that Elsa, and maybe even more characters from the hit movie, are making their way into the Once Upon a Time cast of characters.