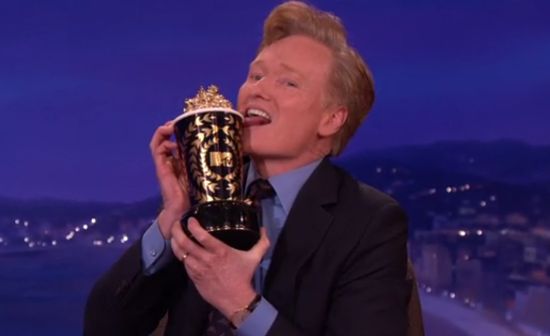 The MTV Movie Awards air this Sunday, but they'll be up against stiff competition for ratings from HBO's Game of Thrones. However, host Conan O'Brien has a plan. "I've…gotten a hold of the Game of Thrones episode that's on that night," O'Brien told Entertainment Weekly. "So on the day before the awards, I'm going to get out as many spoilers as possible to kill the Game of Thrones experience for people. Then, out of either despair or rage, they'll have to tune in to see the MTV Movie Awards." O'Brien says he has nothing left to lose from the show, not even a shot at a cameo. "I've tried to get one of those," he says. "They've now offered me the part of the body double for the guy whose penis has been cut off — which I found really insulting." Conan O'Brein playing Theon Greyjoy. That's…interesting. Sunday will be O'Brien's first time hosting the MTV Movie Awards. Both the awards ceremony and the new episode of Game of Thrones air Sunday, April 13 at 9 p.m. ET.