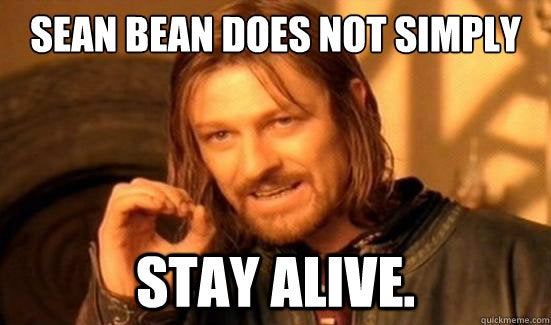 TNT's new series Legends is getting a pretty massive push at Comic Con International: San Diego this year, becoming the first Comic-Con property to take over the San Diego airport and be the dominant visual for travelers arriving at the convention.

That, however, isn't the cleverest thing they're doing in support of the show; they've got a social media push that seems like it could take off, given its resonance with an existing pop culture meme: the predictable and often tragic deaths of characters played by Legends lead actor Sean Bean.

Here's how the network describes the campaign:

TNT is also set to launch a social media initiative supporting Legends in conjunction with its Comic-Con presence. The network is encouraging fans of actor Sean Bean to use the hashtag #DontKillSeanBean in social media postings about the show. The hashtag plays on the fact that Bean has died in more than 20 acting roles, including the two characters for which he is widely known: Boromir in The Lord of the Rings trilogy and Eddard "Ned" Stark in the series Game of Thrones. The hashtag will have its own tumblr page and will be featured on Legends premium items being handed out to Comic-Con attendees.

As illustrated by the meme above, Bean's parade of character deaths has broken into popular culture in a big way; there are websites dedicated to the phenomenon, and t-shirts you can buy in memory of all of his many fallen characters.

Legends, which stars Bean as a deep-cover FBI operative, co-stars Bones, Veronica Mars and Napoleon Dynamite's Tina Majorino and is based on an award-winning book by spy novelist Robert Littell.