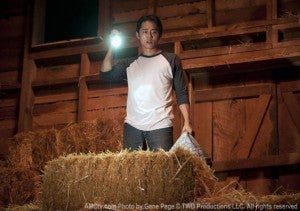 AMC has posted a two-minute video preview of Sunday's episode of The Walking Dead, titled "Chupacabra." The scene revolves around Dale and Glenn having a talk in the RV, with Dale getting a bit paternal while Glenn's (occasionally crazed) message essentially amounts to "women be crazy." The Walking Dead airs Sunday night at 9 p.m., followed at midnight by an all-new episode of AMC's Talking Dead (a call-in discussion show about the series).

One Piece and Mario Unite For a Wild and Pricey Collab