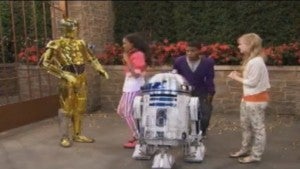 It seems as though there's been some planning that's gone into this whole Disney/Lucas thing. In addition to Star Wars references being dropped on Castle the other day, this week's episode of the Disney Channel series A.N.T. Farm featured a group of kids wandering Lucasfilm's premises looking for George Lucas's autograph. Whether or not any of the kids succeed in getting it isn't clear from this clip, but we do get our first post-merger look at C3-PO and R2-D2. And, no, that doesnt' appear to be Anthony Daniels. You can't have everything, one supposes, and it may have been too expensive to get him just for a thirty-second joke appearance.

Star Wars: After Castle, On to A.N.T. Farm

The Walking Dead Recap With Spoilers: "Out of the Ashes"