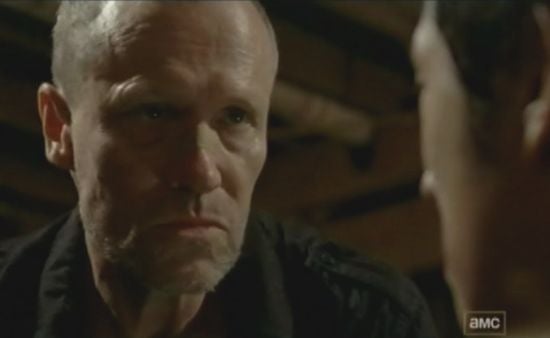 The Walking Dead "When The Dead Come Knocking" raised several new questions in setting up an epic showdown for next week. We know that Rick Grimes seems to have returned to sanity, and he hasn't totally lost his humanity, as he saved Michonne. Will he have what it takes to go up against The Governor? Here are five questions raised in the "When The Dead Come Knocking" episode. 5. Whose side will Andrea be on? – To say the least, Andrea has grown quite attached to The Governor during her time in Woodbury. However, she also spent a lot of time with Rick and his group and Michonne. Since Michonne is now also part of Rick's group, will she turn her back on all of her old friends in favor of The Governor? 4. Whose side will Merle be on? – Rick handcuffed Merle to the top of a roof, where Merle was forced to cut off his own hand to save himself. The Governor took Merle in and helped him to become a hero in Woodbury. However, Merle's brother Daryl is a loyal part of Rick's group. If Merle has to choose between The Governor and Daryl, which way will Merle go? 3. Will The Governor turn on Merle? – While Merle might have a difficult choice to make between The Governor and his brother Daryl, The Governor could make the decision for Merle. The Governor is already questioning Merle's loyalty, and what will The Governor think when he realizes Merle lied to him and that Michonne is still alive? 2. Will Rick and his group attack Woodbury? – Near the end of the episode, Rick and his group are huddled outside of Woodbury. They are hopelessly outnumbered. Will they launch a head-on attack against Woodbury or will they attempt to sneak in undetected to rescue Glenn and Maggie? 1. Did The Governor have sex with Maggie? – In the comic books, The Governor rapes Michonne, but the TV series appears to be switching things up. The Governor is shown threatening to harm Glenn unless Maggie takes her shirt off. Then, The Governor is shown taking off his belt and forcing Maggie's head to the table. However, The Governor walks away from Maggie just before the scene ends. Did The Governor rape Maggie? While it looks like The Governor didn't follow through with his evil intentions, viewers are still left wondering.