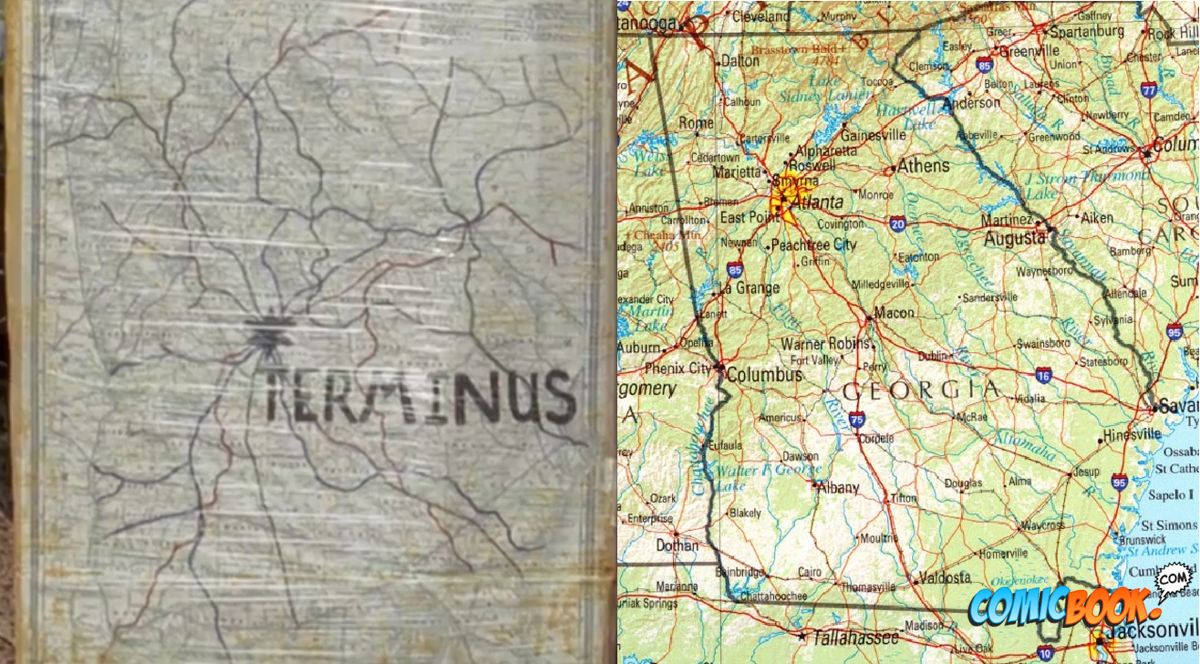 Based on a look at the Terminus map from last night's episode of AMC's The Walking Dead, titled "Inmates," it appears as though the as-yet-unseen story location is set in Macon, Georgia. You can see the map from last night, side-by-side with a map of the state of Georgia, above. Click through for a larger version. The map itself looks quite a bit like any one of a number of historical railroad maps of the state you can find online (Google Cram's Railroad Maps of Georgia). Many of those maps use counties over cities as the larger designations, so Bieb would be featured more prominently than Macon--and there's a Macon county that's just close enough to the city to be confusing for out-of-state travelers--so that could explain the need for an alternate designation for the site. The west side of Georgia has a very specific outline where it borders Alabama. You can see that outline in the image above (Georgia in its entirety seems to be shaded somewhat more darkly, although that could be just because there's more detail in that portion of the map) and based on the location of Terminus relative to the border, Macon is the only city that seems to fit. 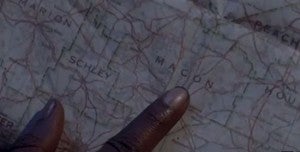 You can see this, particularly, when you look at the little inward point (almost like a nose on a face in profile) directly south of Columbus. In the season premiere, "30 Days Without an Accident," Daryl referred to the Macon area as "seventy miles of walkers [where Michonne] might run into a few un-neighborly types," and discouraged her from heading that way to look for The Governor. Needless to say, if the sanctuary being offered here is actually by...err...The Sanctuary from the comics, the un-neighborly types will be waiting for whoever reaches terminus, indeed. At the end of that episode, Michonne set out for Macon, but never made it because of an injury sustained when the horse she was riding got spooked.  If Macon turns out to be a significant locale for the series, it will be easy to look back on that scene as an omen of some kind, a missed opportunity or some darned good luck for Michonne. (Speaking to an earlier point, this map seemingly shows Michonne pointing to Macon County, not the city.) Macon a key location for The Walking Dead video game.

The Walking Dead: Is Terminus In Macon, Georgia?