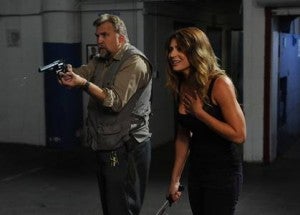 Beginning October 1, a series of four five-minute, web-only minisodes set in the world of AMC's The Walking Dead will be released, ahead of the October 14 premiere of the series's third season, reports USA Today. Lost actor Daniel Roebuck will head up an entirely new cast of characters in the shorts, which will be directed by the show's Emmy-winning special effects guru Greg Nicotero. Titled Cold Storage, the shorts "tell the story of a young man, Chase (played by Josh Stewart), trying to reach his sister in the early days of the zombie apocalypse," according to USA Today. "He finds temporary shelter in a storage facility run by a former employee named B.J. (Roebuck); however, things are not what they appear." Like last year's shorts, all four episodes will be released at once via the AMC website, which will reportedly also live-stream the season premiere of The Walking Dead, presumably while using the commercial breaks to thumb their noses at DISH Network, who no longer carries AMC.