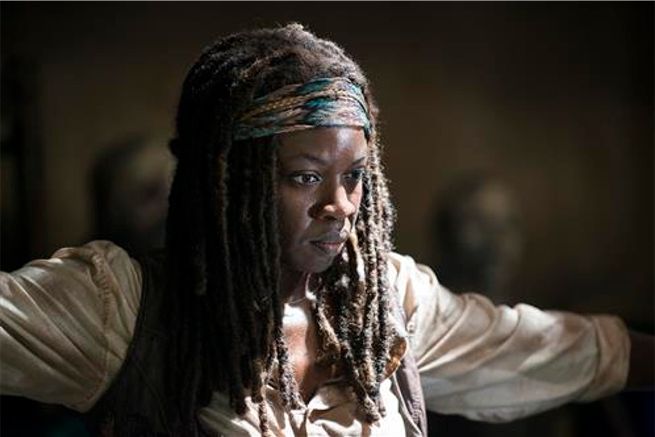 The Strangers episode of The Walking Dead kicks off with a shot of the smoke billowing up from Terminus. Carl is feeding Judith a bottle, and Glenn and Maggie are sharing a romantic kiss. Rick is talking to Tara. Rick says, "You didn't want to be there. That's why I tried to talk to you." Rick adds that Glenn told him that she saved his life. Tara replies that Glenn saved her life as well. Tara holds out her hand to give Rick a fist pump. He looks at her for a second, before chuckling and connecting on her fist bump. Rick tells Tara to get something to eat that they start back at sun up.

It's the next day, and Rick and his group are walking through the woods. Tyreese is getting water with Carol, and he starts talking to Carol about what she did at the prison. Tyreese says that he talked to Rick and some of the others know about it and accept it, but that he needs to talk to the rest to make sure they accept it to. Tyreese says that they don't need to tell them about the girls. When Carol asks why, Tyreese replies that he just needs to forget it.

A lone walker wanders up to the group. Michonne says she's got it. Michonne hits the walker with the butt of her gun. Then, Michonne steps on the walker's head and crushes its head with the stock of her gun. Abraham tells Rosita, "Right there is why we're waiting for our moment."

Carol is giving Rick back the watch that he had given to Sam, who they had met on the same supply run when Rick banished Carol from the group. Carol says that she recovered it from Terminus. Then, Rick reveals to Carol that he saw Sam. Rick tells Carol, "I saw them, kill him, that kid." Rick tells Carol that he still doesn't know about what she did. He says that he sent her away to this and now they are joining her. He asks Carol if she will have them. When Carol nods yes, Rick says, "Thank you."

Rick and his group are trudging through the woods again. They hear a sound and quickly draw their guns, but it's just Daryl with a bunch of dead squirrels. Rick asks Daryl about what he heard last night, and Daryl says it's more that he felt someone was watching them.

Abraham talks to Rick about heading to Washington, while Bob and Sasha joke back and forth with one another. Sasha says a complaint, while Bob responds by putting it in a positive light. The group hears someone screaming for help. Rick hesitates, but Carl insists that they go help. Rick's group races through the woods, and they find a preacher on a big rock, which is surrounded by walkers. Rick and his group quickly dispatch the walkers.

Rick asks Gabriel if he was watching them last night, but Gabriel says that he keeps to himself. As Rick and the group head toward Gabriel's church, Gabriel jokes that maybe he's leading them into a trap to take all their squirrels, but no one laughs. Gabriel says members of his congregation told him that his sense of humor left much to be desired.

When they get to the church, Rick says they want to go in first to look around, because they want to hold onto their squirrels. Inside the church, they come across various religious items, including handwritten scriptures and children's artwork.

When Rick and his group finish their search and go back outside, Abraham says there's a short bus out back, and Gabriel says he doesn't need it. Abraham pitches that they need to continue on their mission to Washington. However, Rick insists they need to gather supplies first and goes back in the church. One by one each member of the group tells Abraham that they are going to follow whatever Rick does.

Gabriel says he's cleaned out every place nearby for supplies and food except for one which is overrun by walkers. Rick asks how many walkers, and Gabriel says a dozen or so. Rick says they can handle a dozen or so. Tyreese agrees to stay and watch Judith. Rick tells Tyreese he's grateful for everything he's done. Gabriel offers to draw them a map, but Rick says Gabriel's coming with them.

As they head out for supplies, Bob starts talking to Rick about Washington, but Rick says he hasn't decided if they are going. Bob says that Washington is going to happen, that he's calling it already.

Daryl and Carol are walking with water jugs. Daryl says that he gets that she doesn't want to talk about it. They come across an abandoned car. Carol goes to check it, but the car want start. She checks the trunk, and there is a battery charger in the trunk. Daryl says whatever happened, happened and they can start over. Carol says they should keep the car a secret in case their group needs it later to escape.

Maggie and Tara are talking outside a gun shop. They hear a noise inside and draw their guns. Glenn comes out. They ask Glenn if it was a walker. Glenn initially says yes before admitting that he tripped over a mop and boxes. Glenn also reveals that he found some silencers.

Rick, Gabriel and the rest of the group reach a food bank. Rick goes inside and he finds a bunch of walkers have fallen into a hole in the floor. The walkers are wandering around in the water, and there are shelves of food all around them. Rick and his group prepare to go down in the hole to get the food. Rick tells Gabriel that he is coming down with them. Rick and his group use the shelves to block the walkers. They stab the walkers from behind the shelves while gathering food. Gabriel looks at one female walker with glasses, and he starts to freak out. He takes off running and tries to climb some stairs that break.

Rick says they have to go get Gabriel. They push the shelves over to trap some of the walkers. The walker with glasses is heading straight at Gabriel, but Rick grabs it and bashes its head in. Bob trips over a walker in the water. He struggles with the walker, before Sasha comes over to help.

Outside the food bank, Gabriel apologizes for panicking. Rick asks Gabriel if he knew her when she was alive. Gabriel doesn't say anything, and Rick says he gets it that Gabriel only tells his sins to God. As they are heading back with the food, Rick asks Michonne if she misses her sword, but Michonne says that she misses Andrea and Hershel, not the sword.

Back at the church, Rick goes around back and tells Carl that they found food. Carl points out some scratches on the wall. He says they are deep like knives from people trying to get in. Carl says there's something else that he found. Carl says what he found doesn't mean Gabriel is a bad guy, but it means something. Carl shows Rick that scratched in the wall of the church is "You'll burn for this."

Inside the church that night, Abraham raises a toast to the survivors. Abraham asks the group if survivors is all they want to be. Abraham then makes the pitch that if they get Eugene to Washington he will help make the dead die so the living can live again. Eugene says there are supplies and infrastructure in Washington to help people survive. Abraham tells the group that they can be safe in Washington and save the world for Judith, for themselves, and the people out there that don't have nothing left to do but survive.

After Abraham's speech, Judith mumbles something. Rick says Judith must know what his answer is going to be. Rick says if Judith's in, then he's in. Rick says, "Let's do it."
Sasha gives Bob a kiss, and he asks for one more. Sasha goes to hold the baby, and Bob wanders off. Tara sits down next to Maggie. She tells Maggie that she was at the prison with The Governor. Tara says she didn't know who he was and what he could do. Maggie acts surprise. Tara says she didn't want it to be hidden that she was there, and Maggie says she's with them now.

Carol is back at the car she found earlier with Daryl. She's just finished charging the battery, when a walker comes stumbling out of the woods. Carol stabs the walker in the head. Then, Daryl wanders out of the woods and asks Carol what she's doing. Suddenly, a car speeds by. Daryl looks, and it's the same car with the cross in the back windshield that took Beth. Carol is confused, but Daryl explains it's the car that took Beth. Daryl and Carol take off in pursuit of the car that passed by.

Bob is outside staring at everyone celebrating inside the church. He wanders off through the woods and starts sobbing at a tree. Somebody in a hoodie comes up and hits Bob in the head from behind. As Bob falls to the ground, there is a scratch mark shown on the tree that Bob was leaning on.

Bob starts to regain consciousness. He sees the guy with the hoodie, and there is a fire in the background. Bob also sees Gareth, who tells him that the good news is that he's not dead yet. Gareth also warns Bob not to read too much into the word "yet," that it'll just drive him crazy. Gareth says that they didn't want to hurt them before. Gareth says that Bob and his people took away their home. Gareth says that in order to survive they have had to become hunters.

Back at the church, Gabriel is looking at a picture of himself with the girl with the glasses and he prays. Rick and his group are still drinking the wine and celebrating that they are all back together and happy.