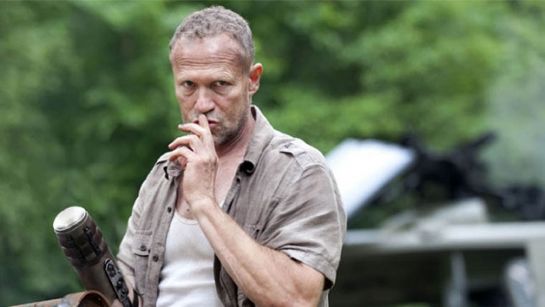 Are you ready for the third season of The Walking Dead? While The Walking Dead Season 3 won't officially kick off until October, we have some early scoop and secrets that have been revealed by the cast and executive producers of The Walking Dead. Here are the five secrets about the upcoming season of The Walking Dead. 5. More Characters From The Comics – In season three of The Walking Dead, fans are going to be treated to two of the most popular characters from The Walking Dead comic books. Danai Gurira will be playing Michonne, and according to executive producer Gale Ann Hurd, "She brings the character to life from the comic book." David Morrissey will be playing the Governor, and according to actress Laurie Holden, "He is the perfect Governor. He is the most authoritative, charismatic, sexy, evil…he's it. He's the Governor." 4. Lots Of Killing – In the first two season, The Walking Dead proved that they weren't afraid to kill off major cast members. But it looks like we've only seen the tip of the iceberg. According to executive producer David Alpert, there will be even more killing in season three. Alpert said, "Honestly, the thing that excites me most is we're going to kill so many people. We're going to kill walkers. We're going to kill people. We're going to kill cast members. We're going to kill people that you care and love, and it's going to be awesome." 3. Carl Finds His Dark Side – In the season two finale, young Carl was forced to put a bullet in zombie Shane. It looks like that moment might have signaled the loss of Carl's innocence. According to Chandler Riggs (who plays Carl), here's what we can expect from his character in season three. Riggs said, "He's growing up. He's definitely not a kid anymore. He's going to the dark side. No more crying or being told to get in the house of course. He's more of a soldier, and he's more part of the group now." 2. Merle Is Returning – It's probably the worst kept secret of The Walking Dead Season 3. After Michael Rooker (who plays Merle) was spotted on the Walking Dead set, AMC made it official by releasing a season three photo of Merle. In regards to what role Merle will play in the third season, executive producer David Alpert said, "The thing to know about Merle is that with Merle you can never know what to expect. So with Merle, you can expect the unexpected." 1. Aspirin Might Cure Zombie-ism – After Michonne was shown picking up a package of aspirin in a Walking Dead season 3 sneak peek, creator and executive producer Robert Kirkman dropped this bombshell, "I'm sick of teasing and not really answering questions, so I'm just going to say that we're revealing this season that aspirin is the cure for zombie-ism." Of course, Kirkman was just joking…or was he?