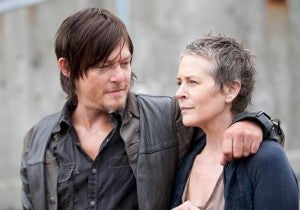 AMC's Image Comics adaptation The Walking Dead comes into its fourth season in about two weeks with a lot of baggage. There's the baggage of being TV's highest-rated series last year. There's the baggage of being the first "milestone" episode of a major show on AMC since the end of Breaking Bad last week. There's the baggage of dozens of new characters and a finale that, let's be honest, didn't thrill the audience to its core last year. And there's a total lack of reasonable expectations on the part of the audience going in. Which version of The Walking Dead will we see? Will it be the pensive, character-driven version that Frank Darabont gave us in season one (and left us with in season two) or the frantic, plot-driven version that Glen Mazzara transformed it into beginning about midway through season two and into last year? Since neither of those guys are around anymore, it's tough to gauge. 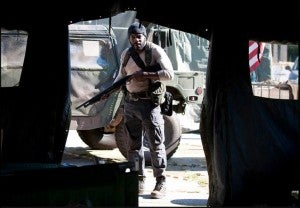 Well, new showrunner Scott Gimple--responsible for some of the show's most popular episodes, including "Pretty Much Dead Already," "Clear" and who reportedly rewrote and show-ran last year's blood-soaked finale--carves out a new niche for himself almost immediately. The season four premiere sees a writer fairly transparently attempting to latch onto the feeling of season two--a little more laid back ("don't call it slow," he would almost certainly plead) and cerebral, with the "scary movie" stuff mostly provided by periodic bursts of activity as opposed to the sustained drama and tension that defined last year. Combining that with the reappearance of one of the show's recurring macguffins, which plays a bigger role in this episode than we could have reasonably expected, will give the viewers who are always trying to tell their friends, "No, really! You should watch it! It's not just zombies!" something they can use to rationalize the fact that they're watching what is, at the end of the day, a show about zombies. And while the stakes aren't as high in this premiere as they've been recently--at least not for the first half or more--there's no shortage of action, no shortage of walkers and certainly no shortage of gore. 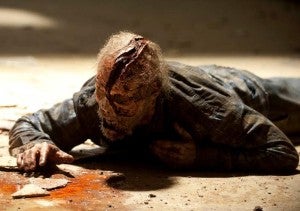 This is where Emmy-winning effects artist Greg Nicotero and his team really shine; the walkers are incrediblyl grotesque, and it's used to great effect. If there was one criticism I had of the finale, it's that there are perhaps too many shots of mostly-decayed zombies being liquefied against a concrete floor or spurting putrid fluid out of a wound. One particular sequence--we'll just say the one with the wine--was so lovingly crafted that you wonder if they realized that about a full third of the audience would be looking away while it was onscreen. There's quite a bit of setting the stage done here, and it seems as though AMC are aware of it; they made both "30 Days Without an Accident" and the season's second episode--titled "Infected"--available to the press at the same time, likely to give some context for some of the things they're laying out in the premiere. There is one moment, in fact, that portends quite a bit of bad if it's to be taken at face value. That moment, something that nobody will think twice about until at minimum the last five minutes of the premiere, occurs early enough in the episode that it may be the second or third time through before fans really start to point at it and get hysterical. There's still quite a bit that's left unexplained and unresolved at the end of the pair of episodes--obviously--but the second builds on the first in a way that the consequences are exponential and the direction Gimple and company are taking at least the first bit of the season seems clear, where the premiere merely hints at the possibility. In any event, "30 Days Without an Accident" fulfills its title's unspoken promise--that there is an accident to reset the counter before the episode's end. The main characters, though, are so insulated from risk and consequence in the premiere that there's bound to be a bit of discussion around whether the addition of so many new characters--many of whom we'll of course never really get to know before they're killed or written out of the series--serves to take viewers out of the show a bit. Certainly so far they feel as much like an obstacle thrown up in the way of the characters as they do real people. And, early on, there are lots of obstacles for Team Prison to overcome and--perhaps more importantly--there's a sense that their lives have started to normalize, they're building a sense of community and everyone--all 100 or so characters living in that prison, ringed by zombies--have something major to lose. Even in the face of an imperfect premiere coming off of a deeply flawed finale, that's a status quo that promises a lot of potential.