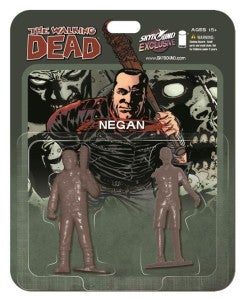 Negan, the villain at the center of the upcoming "All-Out War" in Robert Kirkman and Charlie Adlard's The Walking Dead comics from Image Comics and Skybound, is very much on the radar at AMC, who produce the comic's TV adaptation, Kirkman confirmed to TV Guide. "It's sometimes a struggle because I feel like there are very cool things that are waiting in the wings in the comics that we could do earlier in the show," Kirkman admitted. "But those things only work the way they work because of everything that came before them. We have to build up to them properly. Negan isn't going to be as cool if we don't set up this, this, this, and this. We do want to do Negan, and it seems likes everyone on the show does want to do Negan, but we are going to have to do all these other things first." Added incoming showrunner Scott Gimple, "Reading the book now and reading Negan as a character, I'm like, 'Damn, there's so much to do before we get to him!' One of my favorite issues with him recently was the Carl/Negan issue. I think it'd be such an amazing episode of TV, but we have a lot to do before we get there." The character, introduced as part of last year's run-up to the one hundredth issue of the comic, is a warlord who uses a gang of well-trained thugs to run a protection racket that encompasses the Hilltop settlement, where Rick and his group have been staying. For the series's tenth anniversary this year, the weekly "All-Out War" story sees his sect facing off against Rick's survivors, the organized elements of the Hilltop Colony and others.

The Walking Dead's Kirkman: Everyone on the Show Wants to Do Negan