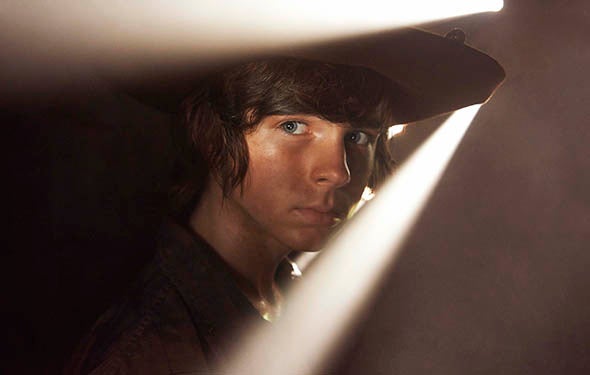 As the fifth episode of AMC's The Walking Dead begins to near its fall finale, we have to wonder: Just when will Carl Grimes actually get a story?

He got an episode last season, and Chandler Riggs acquitted himself pretty well in it. It wouldn't hurt him to get a little more character work in...and if the show had followed the comics somewhat more closely last season, he'd be smack in the middle of some of his most important development right now.

Many fans have complained about Carl's characterization on the TV series, but in the comics he's being groomed as Rick's eventual successor and, while he can be prone to the kind of wonky characterization any kid/teenager is when written by an adult, for the most part he's actually pretty likable.

One of the times when he really started to step into his own was about a year (publishing time) after the fall of the prison, right around the time of the massacre of The Hunters (the group whose TV analogue was the Terminus crowd).

We've talked in the past about the fact that in the comics, Lizzie and Mika's story played out somewhat differently. The characters who found themselves in that position were twin boys named Ben and Billy, and when Ben killed Billy (for the same kooky "I want to see him come back" reasons), the group put him in "jail," secluding him from the rest of the survivors while they debated what to do. 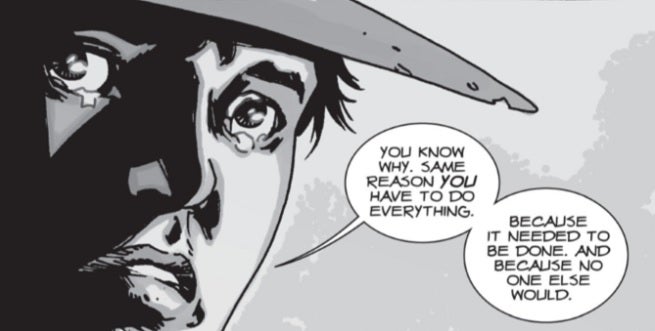 Carl Grimes was having none of the debate, so while the adults squabbled over whether they could justify killing a child, even one as dangerous as Ben appeared to be, Carl snuck in and shot the boy. After the discovery of the body, nobody came forward. Rick ultimately learned that it was his son who had done it, but didn't immediatley tell the rest of the group (it's been a bunch of years, so if I get a minor detail wrong, I apologize).

In The Walking Dead #67 (my pick for the issue tonight's episode will draw from heavily), Rick finally has a moment to talk to Carl about why he did it -- and it's revealed, as seen above, that Carl is doing essentially what he believes Rick would have done: making the unpopular decision that needed to be made.

Following Ben's death and the Hunter massacre, Rick Grimes and company went on a bit of a mission to civilize, trying to take back some of the ground they'd lost in the recent past separating them from the walkers. This could include little things like Rick shaving and cleaning up his hair, as seen in spoilery set photos and red carpet snapshots.

In the comics, though, Carl had a big part to play in that journey, and it came from a place of personal culpability, responsibility and growth. Based on what we've seen so far at the end of last year and the beginning of this, the TV series seems so far to be taking the opposite path: they've infantilized him somewhat, removing whatever "edge" they'd given him when he killed that Woodbury intruder in the woods and moving him back toward being a kid again.

...And maybe that's the arc. Maybe that's what feels like it's missing right now. That bit with killing the Woodbury soldier didn't happen in the comics, and so it could just be that they played it out a bit differently on TV than they did in the comics, with Carl and Rick growing distant following Carl's "sin" rather than banding together to deal with it.

Certainly that wouldn't be a totally unreasonable position; with Carl becoming older in the show at a much faster clip than he did in the comics, the notion that he and Rick would grow apart or have the kinds of disagreements that teenagers have with their parents about boundaries, responsibilities or morals isn't unreasonable. It just seems that, for the moment, he's got comparably little to do when the showrunners keep saying that they're following the comics very closely and at this particular point in the comics, Carl was at his most interesting.

The Walking Dead: When Will Carl Get a Story?