DC has provided ComicBook.com with an exclusive preview of Justice League #3 from writer Scott Snyder and artist Jorge Jimenez.

In the issue, Green Lantern John Stewart falls under the influence of the Ultraviolet spectrum, and lashes out against the rest of the League.

As Snyder told us earlier, the series will introduce Ultraviolet Lanterns, Infrared Lanterns, and other new colors based on the invisible spectrum of light.

"The first arc really focuses on [John Stewart], and Barry as well," Snyder recently told ComicBook.com. "With the discovery that once the Source Wall is broken, all these new clues about why, and all these new clues about the nature of our multiverse and what made it begin to appear, and one of those things is a portal, or a permeable membrane, to a whole new area of the emotional spectrum that we haven't visited before: the invisible tangents of the emotional spectrum, the ultraviolets, and the infrareds, and all that stuff, that contains some of the worst and most sublimated hidden emotions that we don't like to admit are there. Barry Allen discovers there's a Still Force within the Speed Force, and more like that." 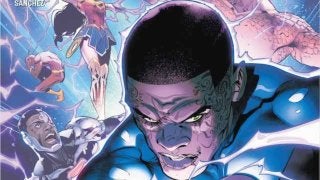 You can see the pages in the attached image gallery.

The heroes of the Justice League -- particularly John Stewart, J'Onn J'Onzz, and Hawkgirl -- will have deep connections to the threats the team faces, with their powers and personalities tied to the cosmic weirdness shaping the two-year plan of Snyder's Justice League.

"Where J'Onn's been, I don't want to give it away, but he was on a mission that really had to do with mysteries surrounding the death of Mars, and what he starts to learn is that some of the catalysts about what happened on his planet might have connections to what's happening to Earth in the multiverse right now," Snyder explained. "J'Onn thinks, at first, it's a very personal soul-searching mission that he needed to go on, but what he learns is that he, and his mythology, and Mars' history might have a lot more to do with this whole giant conflict and mystery that's happening right now in the DCU than he ever expected....The idea is getting to not just use Martian Manhunter, or Kendra, or John Stewart, but connecting them to each other, connect them to bigger mythologies. My goal is that every arc on Justice League expands two characters' mythologies in ways that make them brand new to you, so the first arc, like I said, Invisible Spectrum, Still Force. Second arc we start getting into secret things about Aquaman and Atlantis, and Wonder Woman, and faith and divinity. Third arc, Superman, and Martian Manhunter again."

Justice League #3 is on sale in comic shops and online on July 4. You can check out the official solicitation text below.

John Stewart: Ultraviolet Lantern? Believe it! Under the influence of the Ultraviolet Spectrum, John Stewart engages in some ultraviolence against his teammates Flash, Wonder Woman and Aquaman. Meanwhile, the rest of the League investigates the scene of the fallen Source Wall fragment, and encounters not only a horde of giant monsters, but a pair of longtime archenemies using stolen Atom technology to literally get under their skin. Best to stock up on Cortizone for that sort of itch! All this and…the Turtle? Yep.