Welcome to the 2018 ComicBook.com Golden Issue Awards, where we here at ComicBook.com take a look back at the year that was and choose the best of the best in comics and related media.

In the world of anime, fans were given a chance to enjoy a slew of top-tier TV shows and films in the last year. Not only did a few favorite titles make a comeback in 2018, but the year rang in with breakout stars that came onto the scene and brought some staying power with them. Netflix kicked off the newcomer game with Devilman Crybaby in January, and more recent series such as SSSS.Gridman have come around to challenge its throne.

Continuing anime lived up to the hype as 2018 also ushered in a slew of awaited seasons. As usual, My Hero Academia hit up fans with a new season, and the third installment shines as one of the anime’s best yet. Other titles like JoJo’s Bizarre Adventure planned their comebacks just right, and these continuing series helped bolster an already exciting year for anime.

When it comes to theater, anime wowed as usual with an array of gorgeously animated features. Shonen hit big with My Hero Academia: Two Heroes while director Mamoru Hosoda earned rave reviews with his latest film, Mirai. For a change, live-action anime managed to impress audiences as Bleach leveled up the genre and gave fans hope for future adaptations.

Of course, manga continued its powerhouse streak into 2018 and has carried around a number of quality series. In particular, this year’s standouts include josei underdogs like Tokyo Tarareba Girls as well as one-day masterpieces like The Promised Neverland. 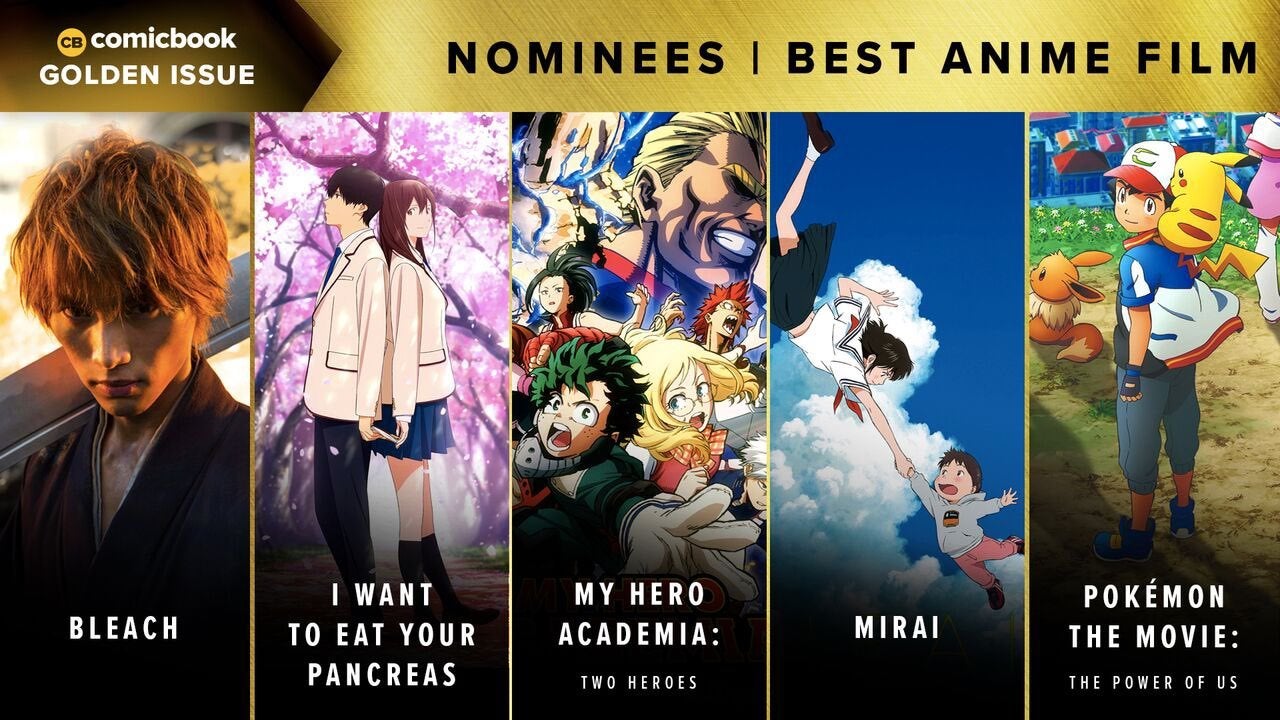 The Best Anime Film category is filled with movies any anime lover will want to add to their rewatch list. From action-packed fight scenes to emotional nostalgia bombs, these nominees have something for everyone and will make audiences give all the kudos to anime.

Anime has countless series swirling around these days, but only the best can keep fans coming back for more. Continuing TV shows stand as the medium's cream of the crop, and there are some series which stand out each year. Checking out any of these titles will make you want to catch up on all their episodes, but be warned! It might take you awhile to binge these fan-favorite series!

Every year, a slew of brand-new anime series get their debut, but it is easy for them to fall by the wayside. The industry is saturated with shows vying for attention, but there are always some titles who managed to pique curiosity. Our list of new series covers everything from a dark Netflix original to one gorgeously melancholic fantasy, but each show will have audiences cheering if fans give them a chance.

If there is one thing anime has learned how to do right, it is storyboard some truly epic battles. The shonen genre has mastered the art of prolonging battles, but this year's list for best anime fight scene rejoice in the brevity of battle. These concise skirmishes prove anime can do almost anything when it comes to fight scenes and keep them as immersive as ever.

Anime may be taking animation to new levels these days, but the same can be said for manga with graphic novels. As comics continue to thrive worldwide, manga has seen a sharp rise in interest in the last year as both new and returning titles have hit shelves. From spinoffs to hiatus comebacks and more, 2018 created a bevy of fan-favorite titles that will turn even the staunchest comic purist into a convert.