Well, dang.  I guess I'd better hope my son doesn't see this post, because he'll want Hulk fists and the Tri-Power Repulsor to go with his Captain America shield and Thor hammer.

Hasbro has launched a TV spot for the tie in toys for the upcoming film "The Avengers."  The film stars Robert Downey Jr (Iron Man), Chris Hemsworth (Thor), Chris Evans (Captain America) and Mark Ruffalo (Hulk).  Sure, there are other stars in the film, but they apparently didn't get some really cool toys.

Here is the video:

And here is an image tie-in: 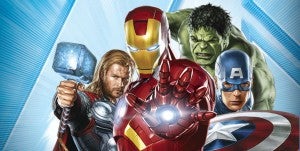 Check out the toys at a toy store or online retailer near you.