NBC's cult hit Community will return to the airwaves in January 2014, NBC announced today, with a back-to-back hour of premiere programming scheduled for the week before its Thursday comedy "roommate" Parks & Recreation airs its one hundredth episode.

This will be the show's first season without comedy veteran Chevy Chase, who had been a controversial figure for the last two seasons behind the scenes and who is rumored to have orchestrated series creator Dan Harmon's firing from the sitcom before the start of the fourth season. Chase abruptly quit with one episode to go last year, and shortly thereafter it was reported that Harmon was taking the show over for a fifth and, most believe, final season.

Community's third season finale--Harmon's last episode--was widely regarded as a near-perfect series finale, had the show not been renewed for a fourth season, so ending the show again might create unique challenges for the new-old showrunner. Last year, many of the plot threads that Harmon had specifically left up to audience interpretation at the end of season three were brought back in season four by David Guarascio and Moses Port, the showrunners who took over from Harmon and who appear to be completely out of the picture this year. 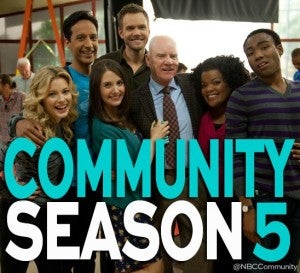 Harmon, not one to hold back his feelings, later compared the experience of watching the fourth season to seeing "a million other [guys]" have sexual relations with his girlfriend.

If he has any hope of reclaiming the series from what he and many of the show's most dedicated fans perceive as a serious drop in quality last year, it's difficult to say how he'll do that or where he'll take the characters; it seemed at one point as though he had said everything he had to say about them and, when it came back, the new guys took it in a different direction. Meanwhile, he's lost not only Chase (of whom he's probably glad to be rid) but also Donald Glover, one of the series' breakout stars and half of Troy and Abed, the comedy odd couple at the heart of many of the show's most memorable episodes. Glover is still technically around for Season Five, but he reduced his role significantly and will now be only a recurring guest, rather than a series regular. For many fans, his decision cemented impressions that the show won't come back for a sixth season.