Animosity's walled city isn't all its cracked up to be, but it's going to take more than mere walls to keep Jesse from reuniting with Sandor.

It's been dark for a while, but it seems Jesse and Sandor have both discovered some hope in our exclusive preview of AfterShock's Animosity #17. In the new preview, Jesse finally gets ahold of Sandor and her animal friends and quickly tells them about the horrors of the walled city. She tells them how those within view animals, making them wear security collars and forcing the girls to eat meat whether they want to or not. In fact, the Headmistress and those who live here don't think much of women either, essentially valuing them only for having babies.

With Jesse's location discovered, Sandor and the crew are headed her way to get her out, but Jesse isn't just waiting for them to help. She pleads with the other girls to help her find a way out (courtesy of her new bear friend). She gets resistance, but Jesse lays it all out for them and manages to get them on her side and building herself a small resistance from the inside while Sandor attacks from the outside.

You can check out the exclusive preview in the gallery and the official description can be found below. 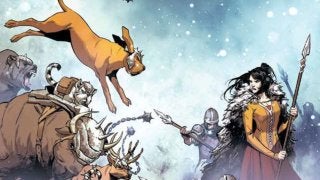 Preview: A Rebellion Begins In 'Animosity' #17

PlayStation Plus Subscribers Getting One of the Most Popular PS2 Games