The photos show Tobias Whale (Marvin "Krondon" Jones III) and Lady Eve (Jill Scott) talking over a dead body. With Lady Eve set to officially make her Black Lightning debut in this week's "Lawanda: The Book of Burial", and Tobias continuing his vendetta against Freeland, there's no telling how that altercation will go. 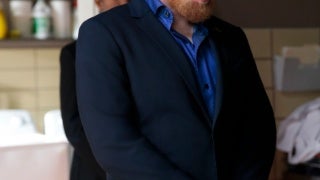 "Black Jesus" is a nickname given to Jefferson Pierce, Black Lightning's civilian identity, in the show's pilot, but here it looks like it might be applied to Black Lightning. During a recent visit to the set of Black Lightning, ComicBook.com asked series star Cress Williams whether it was strange to play a character so revered by his community, but often at odds with his own family.

"It's strange but it's kind of fitting for life," Williams said. "I like to think I'm the most popular guy in my home but still, that's just what happens, you know. No matter what's going on out in the world, no matter if I go out in the world and people recognize me, and want my autograph and this and that, my own home is a very cut clean environment with the dogs, I take care of the trash. My kids are my kids, I am no different than anybody else. It's kind of what life is."

His on-screen daughter, China Anne McClain, started laughing when the "Black Jesus" line was brought up, forgetting that it had been used in the show.

"You got to give me a second on that one," she said, before admitting that in the early episodes of the series, before discovering that her father was a superhero, even Jennifer did not see him as Freeland's savior.

There is not a lot of information in the plot synopsis; the episode will see a new street drug pop up as Black Lightning and The 100 continue to stare one another down.

The episode was written by Pat Charles and directed by Michael Schultz.

Black Lightning airs on Tuesday nights at 9 p.m. ET/PT, following new episodes of The Flash on The CW. "Black Jesus" will premiere on February 7.