The series, which isolates the title character from the rest of the recently-relaunched Sandman Universe, will blend elements of past Sandman stories with familiar aspects from the TV series, mythology and folklore to create a new-but-familiar Lucifer Morningstar -- one who is going to spend the first chunk of the book suffering.

So, as Watters says, it's a book for cheerful people.

Watters joined ComicBook.com earlier this month at New York Comic Con to discuss the series, the pressures and pleasures of working on such a beloved property in the midst of a Sandman renaissance.

When they first announced the Vertigo revival and that you were coming on for Lucifer, it was within days of when Lucifer had just been picked up by Netflix, and everybody in the world was talking about this property. Was it a little bit surreal to be swept up in the inevitable Twitter wave?

Yes. I mean, with the whole thing with the TV show, I was very super aware that this has become a huge phenomenon that not just comic fans were really passionate about, so there was a certain amount of pressure -- responsibility to sort of try and make something that would be at least vaguely recognizable to this huge audience.

That said we are also doing Sandman Universe, we're not doing the TV version, so it was about finding what both of those had in common, and making sure we keep those core elements.

Was that almost kind of a blessing in disguise? Everybody else has this one very definitive version from the comics that they're looking back on and saying "These are what we're being compared to." Having two almost gives you a larger strike zone. 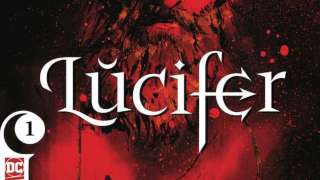 I was a bit lucky that it's a sort of mercurial character. He has the sort of Apollonian, beautiful, fallen angel. He has the more Loki-esque trickster side; he has the hooves and horns side of him. Even outside of Sandman, this is a character who has a thousand different vessels that are recognizable as him. So, basically the story gives us an opportunity to go off and explore a few of those as well.

Did you go outside of the comics and look at kind of, other elements in mythology that you might be able to bring in and surprise people?

Oh, definitely, yeah. We've got stuff coming in from definitely other canons. Down the line we see quite a few of those cropping up.

I looked at a lot of folklore. So we've got a lot of British folklore in particular. I spent a lot of time looking at those and where they might fit into this version of Lucifer.

How did you come to be involved in this big thing?

Well, an editor called me up one day. And yeah, essentially I was talking about a few of my own story ideas with Vertigo already, and then this opportunity came up to pitch a Lucifer story and so I jumped on it. Sent him about a thousand different ideas because I really wanted to write this character.

Did you when you were pitching Lucifer that it was gonna be this massive kind of wave, that they were relaunching all of this stuff, or did that come later?

I'm sure it didn't, but for me, it came later. I knew that there was talk of doing new Sandman stuff beyond this, but the whole thing that transpired into the Sandman Universe and the full gang of writers in the room and all talking story, that was part of the process and that was really great.

Lucifer, I was like, yeah it makes sense that they'd release books and a TV show, all that kind of stuff. But getting to do it as a full blown Sandman thing is an absolute blessing.

How much interaction is there for you with the other creative teams? Do you get to just kind of go your own way or is there a lot of contact between everybody?

It's kind of up to us, in all honesty. They all share a universe, but Lucifer by its nature, at least at the beginning, is off in his own corner because that's the story we're telling, is that he's trapped. So, if other characters are popping in and out, he would seem less trapped.

But Si [Spurrier] and I know each other quite well. We've worked on stuff together before, so we've been chatting back and forth. We're always sort of aware of what each other are doing.

For you, what is the core of the book's appeal? What audience are you saying "this is gonna speak to you" or why?

There's two answers I can give you here. There's what I want to explore with the book, or who I think the book is for. On the latter it's kind of that this is the really dark side of The Sandman Universe. This Sandman as horror.

We've got a human protagonist as well, a cop called John Becker and with him I really wanted to look at how The Sandman Universe looks if you live in it and you have no idea about any of this magical, wonderful stuff that happens in the Dreaming or boys getting to be wizards and that kind of stuff. What if you only just encounter the really, really nasty side of it. No berries, no wondrous things, just the horror that is adjacent to The Sandman Universe. So, Sandman but darker.

But also, thematically, I really wanted to take Lucifer, take this perfect sort of being, this first specimen of an angel and really, really break him and make him suffer the way people suffer. So in the first arc, he's blinded, he's crippled, he's falling apart and he's trapped. Which is essentially what the march of time does to all of us. It's a book for cheerful people!

How do you see Lucifer's role in The Sandman Universe being different this time around than say, in the classic take.

When I spoke to Neil about this and we were talking about the stuff that's happening in the dreaming and we were talking about the bigger story arcs, and he sort of pointed out that to Lucifer, he cares about as much about anyone in the Dreaming or any of the other books as he would about the President. It's all stuff that he's watched happen for millennia. He's watched struggles and he's watched people come and go and be reborn and he's just still there. He's a solid figure throughout The Sandman Universe. But we're about to put him through the wringer so he's gonna have to find his place again, I think.

So is that kind of the first principle, almost, giving him perspective?

Shazam! Star Adam Brody Teases What Fans Can Expect From the Sequel

Jimmy Kimmel Pitches Michael Keaton To Be Robin To His Batman

Suicide Squad: Could Jared Leto's Joker Return Mean the Ayer Cut Is on the Way?