Building on the foundation of DC’s greatest masterpiece, Doomsday Clock has the beginnings of a classic in and of itself — and there is something exciting about that.

Note: This is a non-spoiler review, published ahead of publication. For a deeper dive, come back on Wednesday, November 22.

Later this week, DC will publish Doomsday Clock #1, the first canonical sequel to Alan Moore and Dave Gibbons’s classic Watchmen, and the start of a story that will put the antiheroes of that series on a collision course with Superman, Batman, and other DC characters.

Subtracting the Watchmen of it all, if Doomsday Clock #1 were the first issue of a new comics event from writer Geoff Johns, artist Gary Frank, and colorist Brad Anderson, fans would likely be over the moon. It is a technically excellent comic book; it is a well-written, well-conceived, gorgeously-illustrated book that definitely deserves your attention.

It also accomplishes arguably the most important thing: it manages to follow up "The Citizen Kane of comics" without embarrassing itself, its creators, or DC; and without diminishing what came before. As faint as that praise might sound, it is not: Doomsday Clock roars to life in arguably the most captivating single-issue superhero comic since DC Universe: Rebirth #1.

There is a heart, and humor, to Doomsday Clock which cuts through the bleakness of the world in which it is set and the apocalyptic stakes -- "The End is Here," the cover reads -- that the characters face from the first page. These characteristics are born both of Watchmen and of Johns; there was more humor in Moore's work than many probably recall, and more soul to (most of) his characters, too. Johns, for his part, manages to speak with a voice clearly his own, which is no mean feat while also striving to channel Moore (and mostly succeeding). 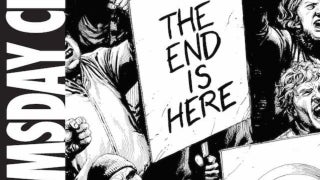 Johns, of course, currently works with the DC Films division and you could put a mirror up to some of Doomsday Clock's character-driven humor and reflect the best moments of this week's Justice League film. Unlike Wonder Woman, Johns did not have a hand in writing Justice League, but it seems to reflect his "humor, heart, and heroics" ethic more than almost any of DC's previous movies.

The use of color is perhaps not as exquisite as it was in Watchmen, but the palette is expertly wielded, and feels neither like a carbon copy of its predecessor nor like anything else DC is currently publishing. In the age of digital coloring, Anderson has a much broader vocabulary than Higgins did, but limits himself to a few overriding tones. Whenever an image breaks through those three or so colors, the vibrancy with which it does so is conspicuous.

Color is also used to highlight certain themes and ideas, including an examination of the role of the mass media in society -- something that could have been easily predicted given the decision to include a cameo by Howard Beale, the fictional newsman of Paddy Chayefsky's classic satire Network.

Like Moore's Watchmen, Johns is not particularly subtle about what themes he hopes to explore; while he has said in interviews and during convention panels that the high concept is that of hope battling against cynicism, there are other, equally-urgent themes explored in the first issue, and one big one that is not explicitly tackled but is alluded to here -- and in Watchmen itself.

The central characters have a layered story, with the same theme playing subtly through each of the layers in slightly different ways. It creates a fascinating character sketch and raises the question of how far Johns and company can take the exercise once these characters are a bit farther along in the story and their journey more fully realized.

None of these above observations should undersell the contribution of Gary Frank, whose art Johns has said the comic could not have gone forward without. Indeed, Frank threads the needle of having Gibbons's general vibe without actually aping him. Frank is as impressive a draftsman as exists in comics, and there have been any number of fans, dubious of a Watchmen sequel, who have expressed a willingness to sign on for anything Frank draws.

One of Frank's few weaknesses as an artist is the relative stiffness of some of his characters, and that is something that is both minimized here (honestly, this feels like some of his best work) and, when present, feels right at home in a world designed by Gibbons, who had a similar visual quirk at that point in his career. Like Gibbons, Frank's faces are incredibly expressive, lending even minor and background characters a life and energy that is seldom seen in mainstream comics.

As a study of Watchmen, Doomsday Clock excels -- so much so that it will likely draw criticism for being too slavish in some respects -- while there will doubtless be critics who are unhappy that it distinguishes itself from the original work, which it does almost immediately.

That, of course, is an unavoidable part of the discussion of Doomsday Clock: Not only is it a sequel to arguably the greatest accomplishment in superhero fiction -- and thus an unwelcome intruder in the canon of the genre to some people -- but it is also a follow-up to a series with a longstanding ownership dispute, as Moore claims his deal with DC was designed to trick him into signing over the characters. There are some fans and comics professionals who side with Moore on the issue, and who have historically objected to DC's attempts to capitalize on Watchmen with things like video games, movies, toys, and the Before Watchmen prequels.

The impact of that philosophy -- not only that Watchmen was a complete story that needed no sequel, but that there is a whiff of immorality to DC's decision to make one -- will certainly creep into the discussion of Doomsday Clock, and may in some small way impact its overall critical reception.

Why? Because Doomsday Clock is so meticulously executed and conceptually complex that in many ways it was written with "serious, scholarly" critics in mind. Those critics tend to be the ones most open to Moore's arguments.

Why include that context, in a review that otherwise ignores it in favor of judging the individual issue on its merits? It's simple: there is no way to fully remove that context from any serious discussion of Doomsday Clock, and to ignore it would create a massive blind spot in the very conversation that a review hopes to have with its reader.

There is also something more primal to it: Apart from some pages that do not fully take advantage of the nine-panel grid as a structure and the occasional panel that could be more dynamic, Doomsday Clock #1 is a stunning accomplishment. The question of whether or not it "should exist" may be the only significant thing hanging over the issue.

That seems like a pretty damn good starting point.

...And those pancakes you saw numerous comics and media types tweeting about? That will all make sense by the end of the issue, too.

The Flash: First Look at Michael Keaton as Bruce Wayne

The Flash: Michael Keaton and Ezra Miller Photographed in London as Production Moves to City

The Final Season of Black Lightning is Finally on Netflix