DC has provided ComicBook.com with an exclusive preview of next week's Justice League #38 from writer Christopher Priest and artist Mario Santucci.

You can check out the pages in the attached image gallery. 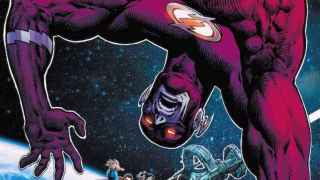 Following this week's announcement that Scott Snyder will take over Justice League later this year, Priest's run appears to be limited to this story, and a second which even more explicitly deals with questions about who should lead the League.

This likely feeds into the family of Justice League titles set to spin out of the Justice League: No Justice event. One might credibly speculate that Priest's whole run is about setting up a rift within the League that could pay off in the No Justice story, giving the "Big Seven" a reason to launch separate teams.

Hell, the title "No Justice" itself may bolster that argument.

This week's issue centers around the League searching for the "counterfeit Batman" who has been making the League look bad around the world in an attempt to help them in his own, misguided way. It feels a bit like they could be constructing a Bat-villain roughly equivalent to Hunter Zolomon/Zoom in The Flash comics -- which is interesting timing given that Zoom himself has finally reappeared after having been absent since Flashpoint in 2011.

(As an aside, this begs the question: Could writers create a kind of Injustice League of Good Intentions, featuring villains whose motives are a twisted version of morality? There are so many for Superman, it would be difficult to pick just one to be on the team...!)

Meanwhile, this issue centers on the relationships between Leaguers. If, indeed, the above speculation holds it could theoretically follow that characters like Wonder Woman and Cyborg will eventually end up on the same team following the Justice League shakeup becuase

You can check out the official solicitation text below.

"The People vs. Justice League" part five! Alone on the Watchtower, The Flash must find a way to save an astronaut drifting out into space. Meanwhile, Batman's obsession with redeeming himself for two critical failures feeds a growing crisis of confidence in his leadership.