Hot Toys has unveiled their second Justice League Batman figure, following the release of a tactical Batsuit version earlier this year. Unfortunately, it seems like a bit of a departure from Hot Toys’ usual brilliance.

Note: If you purchase one of the awesome products featured below, we may earn a small commission from the retailer. Thank you for your support.

In addition to new masked and unmasked face sculpts, the latest Justice League Batman figure features three interchangeable eye pieces and lower faces, a new Batsuit and leather-like cape, as well as a variety of gadgets and a Parademon gun. The figure will be available to pre-order right here on Sideshow Collectibles in both Deluxe and Standard versions - likely by the end of the day today, December 7th. The Deluxe version included a special diorama figure base inspired by Batman’s battling scene with the Parademons. The full list of features is available below. 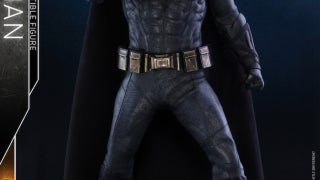