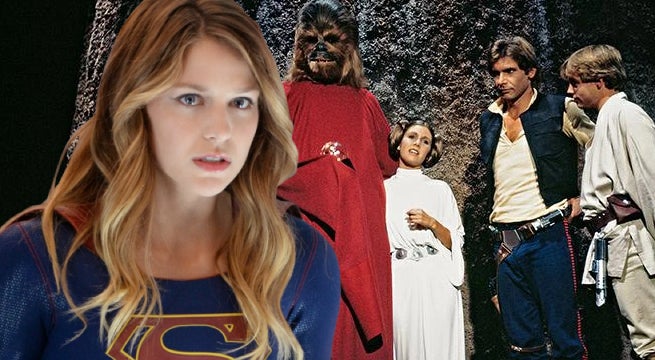 Supergirl celebrated the holidays in tonight's midseason finale, and dropped a pretty awesome reference to an iconic Christmas special.

Spoilers for tonight's episode of Supergirl, "Reign", below!

Tonight's episode saw Kara Danvers/Supergirl (Melissa Benoist) throwing a holiday party for her friends. Among the guests were J'onn J'onnz/Martian Manhunter (David Harewood) and M'yrnn J'onnz (Carl Lumbly), the latter of whom was celebrating his first Christmas.

M'yrnn remarked how nice it was to celebrate the end of the year this way, and then compared it to Life Day. This caught the ear of Winn Schott (Jeremy Jordan) who wanted to clarify that M'yrnn was, in fact, talking about the same holiday from the Star Wars Holiday Special.

If you're unfamiliar with the Star Wars Holiday Special, you're missing out. The 1978 TV special gave fans a sort of connective tissue between the first two original trilogy films, and followed Luke, Leia, and Han helping Chewbacca celebrate Life Day, a Wookiee holiday. Along the way, a wide array of Star Wars characters appeared between musical numbers from Jefferson Starship and Bea Arthur.

The special was almost universally panned upon its release, and was never rebroadcasted or released on home video. It has since lived on in various bootleg copies from fans, and can be viewed throughout the Internet to this day.

This, of course, isn't the first Star Wars reference on Supergirl. But it does pose some questions. Do Martians know about Star Wars (aside from J'onn's love of Empire Strikes Back)? Or do Martians have their own version of Life Day? Maybe Supergirl fans will just have to stay tuned to find out.