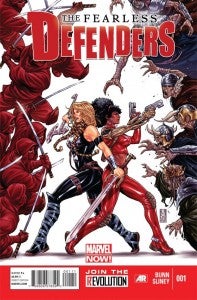 Cullen Bunn is not yet the household name that writers like Rick Remender and Matt Fraction are to comic book fans, but he's working on it--in fact, over the course of the last six months or so, he's taken over titles from each of the two, currently writing both Venom and the forthcoming Marvel NOW! relaunch of The Defenders. No longer tied to Dr. Strange or the previous Defenders series written by Fraction, The Fearless Defenders is in fact more in tune with the first part of the title--The Fearless, Bunn's 12-issue maxiseries from Fear Itself which saw him take on the Asgardian heroine Valkyrie. In the series, Valkyrie was pitted against Sin, the daughter of the Red Skull, as the pair raced to try and assemble the hammers that fell to Earth at the end of the core Fear Itself series. At the end of the story, Valkyrie finds herself pledging to reassemble the Valkyrior, this time gathering worthy bearers for the artifacts from Midgard rather than Asgard. At the start of Fearless Defenders, however, she's failed to get the process off the ground, putting herself and the world in a dangerous situation. Bunn joined us to discuss his upcoming, ongoing Fearless Defenders series, and along the way we nudged him a bit to see where things stood with the television adaptation of The Sixth Gun, Bunn's supernatural Western, which was first optioned by Syfy but somehow made its way up the NBC Universal food chain to NBC and is currently set to be produced by Lost's Carlton Cuse. ComicBook.com: How'd this title come about? It's not exactly as though Marvel has had a particularly easy go with either female-led series OR Defenders books in the recent past. Cullen Bunn: The idea for the series actually took shape while I was working on Fear Itself: The Fearless. I was trying to figure out a few interesting points to end that limited series on, and I had this notion that Valkyrie might be required to pull together a new team of Shield Maidens from the women of Earth. I sent the idea to my editors, along with a note that they could expect a series proposal from me soon. I think Marvel is willing to take a chance on a book if they think the idea is solid. ComicBook.com: Maybe this is colored by stories from other creators at other publishers, but the idea of sending an unsolicited series proposal for something like Marvel NOW! seems doomed to fail. I'm guessing you didn't know at that point when the launch would be happening? CB: Yeah, I think unsolicited proposals have a much harder time finding their footing. I was taking a chance since the idea jumped into my mind so clearly formed... and I had some time working with Tom Brevoort (who was editing Fearless at the time). At the time, though, I had no idea about Marvel NOW!. Well, I think I knew something was on the horizon, but I wasn't sure what it was. ComicBook.com: There's something really interesting, I think, about the fact that the premise of this book is kind of that Valkyrie is starting out way behind the curve. You told Newsarama that she's failed utterly in putting together a new team, or somethnig to that effect. CB: Because it took a while for the book to be approved, I decided that maybe Valkyrie had been dragging her feet. That gave me a reason why it has taken so long for the team to come together. I thought it might be interesting if Valkyrie basically couldn;t find anyone she thought wasd worthy of being a Shield Maiden. She's a snob that way. And, yeah, because she has been procrastinating, ther doors have opened for something terrible to return to Earth. 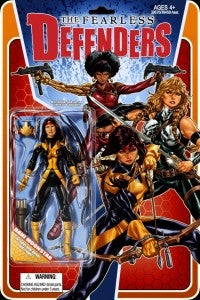