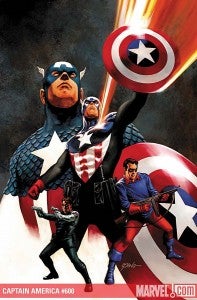 If you were to survey the customer base of an average comic book shop, you would probably find that most of the patrons buy from several of the major publishers. There exists, however, many who would proclaim themselves as either "Marvel only" or "DC only" readers, and for one reason or another they can usually tell you why. For some, a certain story arc turned them off to a company, or perhaps a character's death (read "death") was the proverbial straw for them, making them swear off any title that Marvel or DC published from there on out. While they may not read a certain company's titles, they probably are aware of what the other is doing, and if they've paid attention to current trends in both companies, they may find the lines between companies starting to blur. Perhaps merge is a better word. Over the past two years, the stories, character directions and events from the two biggest comic book publishers are becoming increasingly similar, almost strangely similar. It's hard to say if this is purely intentional, as both DC and Marvel have enough devoted readers to not feel the need to riff on each other in a way that elicits obvious comparisons. There are several notable incidents of this, and it doesn't always work for the respective company. At some point, each company has pulled off the theme/event better than the other. Consider the following cases in point: 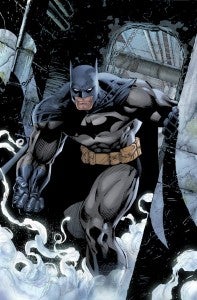 The "Deaths" of Captain Americaand Batman: Marvel dropped a bomb on readers in 2007 when Steve Rogers was shot on the streets of a courthouse in Captain America #25 and the world flocked to see what could have caused this event. It was a singular event that sent shockwaves throughout Marvel's character base. The root of the plot came back to Cap's nemesis: The Red Skull. Sidekick Bucky stepped up and took on the role of a new Captain America for a new time, and has been amazing ever since. Over at DC, Batman met his fate over the course of several months, spanning the events of 2008's "Batman R.I.P." and Final Crisis' (2008-2009) stories. While R.I.P. had some clever and inventive moments, it was Batman's death at the hands of Final Crisis villain Darkseid that really brought the point of the series into focus. Young Nightwing, former Robin Dick Greyson, took up his former mentor's cowl and is now the current Batman. Overlap: Both characters ended up not being dead, more like "stuck in time". Both men's sidekicks had difficulty picking up where their mentor left off, and in the Captain America: Reborn and Return of Bruce Wayne stories, the men explore the various eras of history in order to make it back to the present. Much too similar in story and direction, and so far Marvel has done a better job at establishing Bucky as a man in his own right. Dick, currently, feels like a substitute. Advantage: Marvel 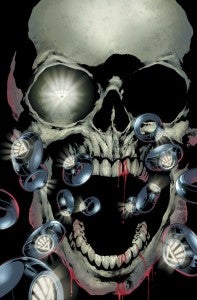 Blackest Night/ Necrosha: Hey, I love zombies as much as the next person, but the undead have taken over in many ways lately. They're everywhere, most notably in DC's mega-event of this year, Blackest Night. When the Black Lanterns emerge, made up of the dead of the DC universe, heroes and villains alike, they have mayhem and death on their minds, and it takes the combined might of the GL Corps, along with a powerful White Lantern, to derail their efforts and in the process several of the DC's long departed were brought back to life. Marvel's X-Men had their own problems when Black Queen Selene decided to resurrect several dead mutants in her quest to become as powerful as a god. Her resurrection of Proteus, one of the X-Men's most powerful foes, felt very similar to that of Parllax's return in Blackest Night. In the end of both Necrosha and Blackest Night order is restored and the day saved. Overlap: The biggest thing here are the emotional punches given by the return of characters from both universes who confront old friends or foes in ways that maximize the surprise element. It's an opportunity for both publishers to explore the potential and new opportunities of characters who stayed alive this time, such as Martian Manhunter and Cypher. DC's story seemed much more necessary that Marvel's, and too many X-events can spoil the fun. Advantage: DC 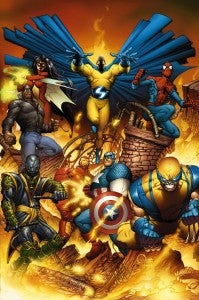 Justice League/Avengers: Two of the most iconic teams in all of comics come from these two publishers, and the past two years have seen dramatic shifts in their directions and memberships. After Civil War and Dark Reign, the Avengers found themselves with a new roster and on the run from Norman Osborn's forces. The JLA has seen dramatic changes in membership, even just over the course of the past year. With major players such as Batman, Superman and Green Arrow not on the scene and the villainous plots of Prometheus splitting the team apart, the roster has been written in pencil over the past several issues. The events of "Cry for Justice" over, the team seems to have settled, for now, much like the Avengers, as they enter the Heroic Age. Overlap: While each team has its "type" characters, such as Wolverine/Batman "the brooding loner", and big, sweeping story arcs, each team is beginning to fall into a pattern of predictable unpredictability as it relates to the line-up of those teams. The JLA is seeing roster changes almost bi-monthly now, and the disjointedness in line-up is causing a bit of wear. The Avengers have had their shifts, but the changes were all part of a bigger story. The coming of the Heroic Age this week bodes well for Marvel, but what of the JLA? Advantage: Marvel So what of it all? Big deal, you may be saying. Perhaps, but consider too what this means for comics. Are we running out of ideas? Are the archetypes becoming too much to sustain? I would say no, but the growing similarities between the big two are indicating a somewhat boring case of "chicken or the egg" syndrome. How do we continue to wonder at stories and arcs if we immediately think of how DC/Marvel just did that same sort of thing two months ago? There's hope with Marvel's Heroic Age and with DC's Brightest Day, as both seem to, finally, be verging off into different directions. There's still too much creative land to cover for the most popular companies to, probably unintentionally, borrowing from each other. The examples provided above could certainly be expanded upon, but what remains are two big, creative companies, who are hopefully each finding their own rhythms to dance to!

Dancing to the Same Drum: DC and Marvel's Growing Similarities