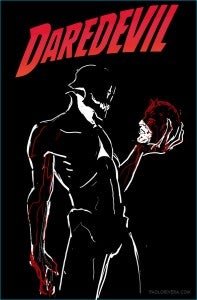 This is just such a great-looking cover, that when we realized it wasn't going to see print, we wanted to make sure it got circulated a little bit. Artist Paulo Rivera, the regular series artist on Mark Waid's critically-beloved Daredevil run, has revealed a very special "variant" cover to October's Daredevil #19 on his personal blog. According to the artist, he prefers it to the version that will be published, but he abandoned it due to similarities to a popular, creator-owned property with which he didn't want to be confused. "Coyote is the the first villain I've ever gotten to design for Marvel (with one small exception)," Rivera said of the character featured on the cover, who also appears on the final, solicited cover that will be available in comic shops. "I even got to name him! He may not look like much, but I assure you, he'll be one of the toughest foes Daredevil's ever had to contend with. "I wanted to give him a sort of 'jester' feel, which led to the faux collar and the medieval shoulder pads—I've always liked that cut, and Game of Thrones reminded me of it. I actually like the first sketch I did more, but felt it was a little too close to a classic Grendel cover. The characters already share a color scheme and I didn't want to make too many comparisons. I can't yet reveal all my design sketches, but I will after the story is published." We're looking forward to it!