Marvel's Doctor Strange is now hitting theaters in The UK and other overseas markets, which means that SPOILERS are starting to leak out.

As with every Marvel movie, it's time to discuss what Doctor Strange's mid-credits button scene means for the Marvel Cinematic Universe Phase 3, going forward. Needless to say, if you haven't seen Doctor Strange then STOP reading now - MAJOR SPOILERS FOLLOW.

The mid-credits scene of Doctor Strange is set within the Sanctum Sanctorum - aka, the New York sanctum that Doctor Strange comes to reside over. The scene features Strange hosting a very special otherworldly visitor: Chris Hemsworth's Thor, who has come to Strange for a favor.

Thor needs help to locate Odin his father, who is somewhere on Earth. However, Strange (having seemingly had time to settle into his role as a mystic protector) is wary; as the cosmic warden of Earth, he is well aware of Loki, and since Thor and Loki are seemingly in cahoots once again, Strange needs assurances from Thor that once assisted, the Asgardians will find their way back to Asgard. Thor agrees, and the pair set off to fulfill the task.

...Of course, this being a Marvel movie, the scene has a funny visual gag in which Doctor Strange conjures a big glass of ale for Thor - one that perpetually refills itself.

What Does It Mean?

This scene is presumably the bridge between Doctor Strange and the events we'll witness in Thor: Ragnarok. We already know from some leaked Thor 3 set pics that Thor spends part of the movie on Earth, locating Odin, who was presumably trapped in the Midgaurd realm by Loki, after the events of Thor: The Dark World. 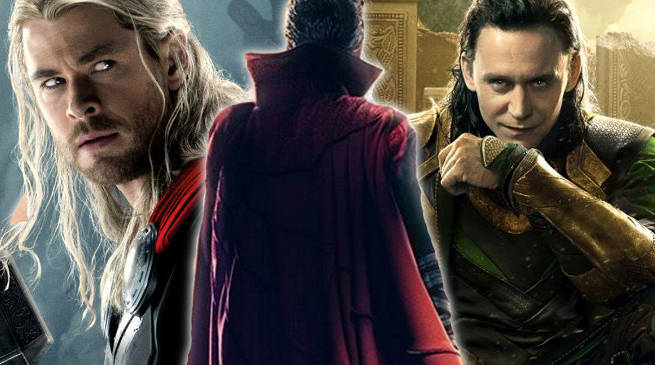 As the threat of Hela (Cate Blanchett) and the fire demons come to the gates of Asgard, it's easy to presume that Loki would find himself in over his head in his impersonation of Odin. He and Thor will likely have to re-unite a third (final?) time, in order restore the All-Father to power, so that combined, they can thwart Hela and stop Ragnarok. That's just a presumption - but one that could make for a damn fine Marvel movie.