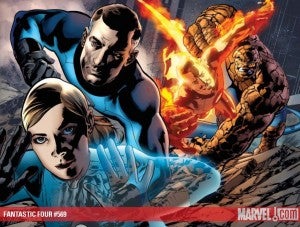 As Mark Millar concludes his run on Marvel's Fantastic Four, the next creative team of writer Jonathan Hickman and artist Dale Eaglesham is waiting in the wings to take the series in a new direction. Millar's run on the series has been an interesting one, with a few hits and an equal amount of misses as the narratives have spanned universes and timelines, and now this final issue in the current storyline, Doom's Master, is here with issue 569. This plus-sized issue promises us a conclusion to the FF's showdown with the Marquis of Death and the wedding of Ben Grimm! Overall this issue finally delivers on this arc's narrative promise and clears the slate for Hickman. The team is facing staggering odds, as they are assailed by Fantastic Fours from other dimensions who are seeking revenge for Reed's unwillingness to kill a mutant, Clyde Wyncham, whose death would save innumerable universes. The pace of the battle and scope of the story is frenetic, as Sue and Johnny face down the hordes of FF's, Reed and daughter Valeria plot a way to shut them down, and Ben takes off to seek Wyncham. An interdimensional battle wages between the Marquis and Wyncham, wonderfully illustrated by Stuart Immonen, which leaves the Marquis spent of a good part of his power. What follows is classic Fantastic Four storytelling, as the team, now armed with the powers of their alternate reality counterparts and with little time to spare before their death, battles the Marquis in wonderful frame by frame action, as each member is given a moment to shine on the page. It is here that the real twist of the story unfolds, as Doctor Doom plays his hand in a grand gesture that ties up several of the nagging loose ends from the previous issue. The arc then shifts to Ben Grimm's wedding, where a couple of surprises await! Even though I was a bit critical of the current run of Fantastic Four in a recent article, I am glad to see that this issue has returned the team to their honored place among Marvel's most compelling and vital books. Expectations are high for the forthcoming issues under Hickman, and it seems that, finally, this issue has redeemed the last few under the current team. Overall a fantastic ending to a somewhat up and down run.