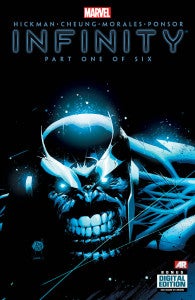 #1, released last month, became just the third comic in 2013--and the first Marvel Comics title--to generate $1 million in retail sales. The comic was offered at a steep discount to retailers, sometimes as much as 70% off, which increased overall ordering, so until reorders start to come in it will be difficult to see just how consumer demand keeps up with the other million-dollar comics: Superman Unchained #1, and Justice League of America #1. According to ICv2, who measure comics sales, Infinity had 205,000 copies move to retailers. Superman Unchained sold $250,000 copies and Justice League of America sold 307,000, so Infinity hasn't yet caught up to those in terms of retail orders. Late last year, Marvel's $7.99 price point helped to push The Amazing Spider-Man #700 up over $1.5 million.